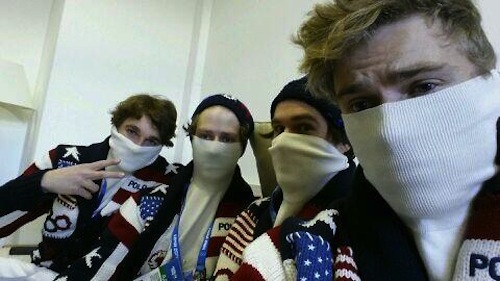 America’s ‘Team Turtleneck’ secured their country’s third 1-2-3 in an Olympic final in the men’s inaugural slopestyle skiing event as Joss Christensen, Gus Kenworthy and Nicholas Goepper wowed the judges and supporters with tricks of the highest quality.

The three medallists, plus ninth-placed Bobby Brown, make up the Turtleneck Gang, both terms which were coined by members of the team on Twitter.

The last US clean sweep came at the 2002 Salt Lake City Games in the men’s snowboard halfpipe and the previous such feat was in the 1956 men’s figure skating.

Nicholas is always the guy to beat in a contest, he’s so consistent and so incredible and Joss is really killing it right now

Christensen, who lives in the freestyle mecca of Park City, Utah, laid down two runs in the mid-90s, but his first run of 95.80 was enough to keep him in gold medal position throughout the second run.

The sun-softened course at the Rosa Khutor Extreme Park did not cause too many problems, with Christensen pulling out a switch triple-corked 1440 on the final jump of his first run to impress the judges.

Kenworthy also hit a triple cork on his second run, pushing him into the silver medal position after a poor first run had left him in tenth place.

And Goepper went against the grain by deciding to ski without poles, the result of a hand injury sustained earlier in the season, but did not attempt a triple, which may ultimately have been the difference between the pre-event favourite winning gold and bronze.

“Nicholas is always the guy to beat in a contest, he’s so consistent and so incredible and Joss is really killing it right now.

“He’s one of my best friends and I am stoked for him.”

Norwegian Andreas Haatveit was another rider to score in the 90s, having been awarded 91.80 to take fourth place, while Britain’s James Woods was fifth with 86.60 as the standard soared through the roof.