Sochi 2014: Britain a gold medal away from best ever Winter Olympics if men's curling quartet can claim victory on Friday 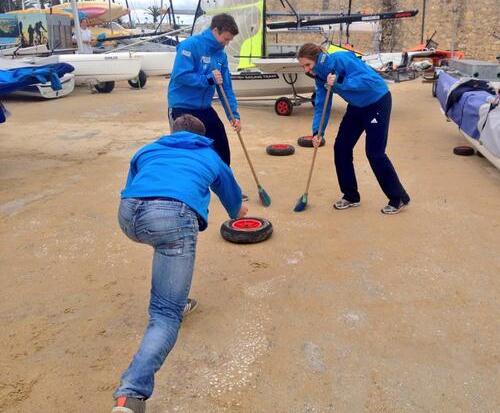 Over the past couple of days Britain has come to a standstill to watch curling, proving that even a game played in perpetual slow motion can be utterly gripping.

People speculated wildly on the importance of the hammer, drew diagrams on napkins of ideal stone placements and pondered the improbability of a triple take out.

Eve Muirhead, alongside Anna Sloan, Vicki Adams, Claire Hamilton and alternate Lauren Gray, was devastated after a semi-final defeat to Canada meant there would be no Olympic gold to add to their world title.

I want the gold. You get this opportunity once in a lifetime and it’s up to us to seize the day and make some incredible history

Less than 24 hours later, they responded with a tactically brilliant 6-5 win over Switzerland’s Mirjam Ott, Muirhead delivering a textbook final stone – under the most extreme pressure – to secure the victory.

The bronze medal means Team GB have now equalled their best ever performance at the Winter Olympics, a record dating back to the 1924 Games in Chamonix. If David Murdoch can win curling gold in Friday’s final it will officially be the best ever.

Murdoch will now play the Canadian Brad Jacobs – who wrote him off as defensive before the Games – for Olympic glory in a final to savour.

It is a deserved reward for a player who has suffered his fair share of Olympic disappointment, missing out on bronze by millimetres in Turin and crashing out in the extra end of a tie-breaker four years ago in Vancouver, where he had arrived as world champion.

“The curling gods have been looking down on me this week and it makes a change. We have to go out there with confidence and no fear; go for it and believe.

“This is a reward for 12 years of dedicating yourself to a sport, to beating your body up, going through injuries, training hard and make sacrifices. After all that time I’ve proved it pays off.

“Having the experience of the near misses in Turin and Vancouver has helped me keep my head and settle my play. This team believes in itself. I can’t believe the confidence we have and now we’re in the Olympic final.

“I want the gold. You get this opportunity once in a lifetime and it’s up to us to seize the day and make some incredible history. I’m delighted getting the medal I’ve worked so long for but we want the gold and we’ll be pushing everything to get that.”

Murdoch admitted he nearly quit the sport after the disappointment of Vancouver. He found himself on the fringes of the team, wondering whether his moment had gone.

You hear a lot of talk about momentum and destiny in sport and the 35-year-old certainly has the momentum after his incredible shot against Norway that secured his semi-final slot and yesterday’s nerveless performance against the ice-cool Swedes, who are the world champions.

“After Vancouver I thought that was it and I’d never get back,” Murdoch admitted.

“You don’t get the chance to go to the Olympics very often. I went off the boil and my heart wasn’t in it because I thought Vancouver was my chance. Then I got a bad shoulder injury and I honestly thought that was me done.

“But credit to my coach, Soren Gran, he changed the course of my life and I moved to Stirling to train full-time and I’ve practised harder than I’ve ever done in my life. He’s pushed me right to edge and we’re getting the benefits now.”