Sochi 2014: Canada are the first nation to win both the men's and women's titles after dominant displays by both teams 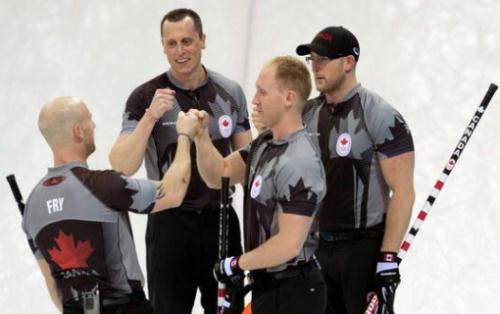 Canada are the undisputed champions of curling after they became the first nation to win both the men’s and women’s Olympic titles.

The men’s team, skipped by Brad Jacobs and known as the Buff Boys, thrashed Team GB 9-3 in the final to secure their third consecutive gold medal.

The rink got off to a slow start in their first Olympics, losing two of their opening three games in the round robin stage, but they quickly recovered and produced some stunning displays to record big victories over Russia and Norway.

This week was a huge grind, the toughest test for me and my team

They brushed aside China 10-6 in the semi-finals with their most complete performance of the Games but were never really pushed in the final as David Murdoch’s Team GB failed to produce their best form.

Jacobs admitted that the winning margin was a surprise.

“This week was a huge grind, the toughest test for me and my team,” he said.

“I’m ecstatic, it’s awesome, amazing. There are a million other words that can explain it but that’s all I can think of right now.”

Canada raced into a 5-1 lead after just three ends with nerves appearing to get the better of the British players as they struggled to judge the weight of their shots.

They led 6-2 at the mid-game break but the interval did little to help the Brits as Murdoch missed the chance to secure a double in the seventh end and Jacobs’ one in the eighth end drew the concession.

“We were struggling with our game too much and the few chances we had we didn’t take any,” he said. “It felt a little bit like giving up, sadly.

“I don’t blame anyone on my team for the loss. I take more of the blame myself for not preparing them in the best way for the finals.”

Murdoch said: “I’m disappointed. It was the opportunity of a lifetime but it wasn’t meant to be.

“We had a poor start and it gave them a lot of confidence. It was a Herculean task to get back into the game.

“It’s a kick in the teeth but winning a medal at the Olympics is something I’ve always dreamed about. It’s super-cool winning a silver medal as not everyone can have gold.”

Jennifer Jones’ rink were just as dominant as their male counterparts, becoming the first women’s curling team to remain unbeaten on their way to gold.

We’re going to have that little OR, Olympic record, next to our name forever

Beating Sweden 6-3 in the final secured their first gold since the 1998 Games and prevented the Scandinavians winning a third consecutive title.

The Canadian’s quickly emerged as favourites for gold as they breezed through the round robin stage. In the semi-finals they held-off a stirring comeback by Britain to win 6-4 with Jones producing a flawless display.

“We’re going to have that little OR, Olympic record, next to our name forever,” Jones said on going unbeaten. “It’s one of those records that can only be tied and never broken.”

For Murdoch and his rink it was a disappointing end to the tournament but they exceeded many expectations in winning silver.

In an up and down round robin stage, a semi-final spot looked secured after they won five of their first six games but three consecutive defeats forced them into an eliminating tiebreaker with Norway.

Trailing 5-4 in the final end, Murdoch produced the shot of his career and the shot of the tournament to secure a double and win the game.

The Scot then held his nerve with the final hammer of the semi-final to secure another double to overcome Sweden 6-5.

The silver medal added to the bronze won by Team GB’s women’s team. Eve Muirhead’s rink overcame the disappointment of losing out to Canada in the semi-finals to beat Switzerland 6-5 after recovering from being 3-1 down.

Sweden won bronze in the men’s draw after they beat China 6-4 in an extra end.

Next up in curling is the 2014 World Championships, with the women’s event taking place from March 15th-23rd in St John, Canada, and the men’s event from March 29th – April 6th in Beijing, China.