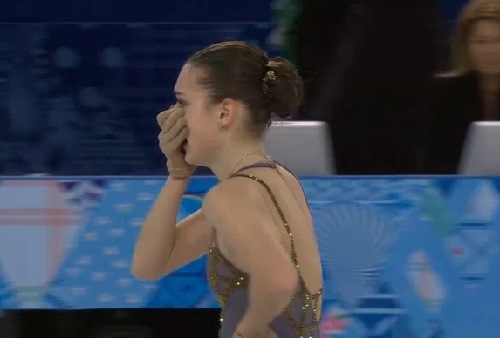 It took the Sochi 2014 hosts just over 24 hours to recover from the malaise of their ice hockey giants’ shock loss to Finland as Adelina Sotnikova deposed South Korean ‘Queen’ Yuna Kim to become the first Russian woman to win an Olympic figure skating gold medal.

The Russian produced the free skate routine of her life to overhaul defending Olympic champion Kim, who had held a slim lead of just 0.28 points after yesterday’s short program and despite a similarly stunning free skating display was adjudged second best.

Former junior world champion Sotnikova’s program was packed with difficulty, including a triple lutz, triple toe and double axel-triple toe combinations which the judges handsomely rewarded as the winning margin was over five points.

I could hear the shouts of ‘Keep going Adelina’. I just couldn’t skate badly

As the 17-year-old Sotnikova jumped for joy on the podium, the cheers from the enraptured audience reached a crescendo and bouquets of flowers rained down on to the rink.

“The atmosphere was wonderful,” said Sotnikova.

“I felt something amazing coming from the crowd. I could hear the shouts of ‘Keep going Adelina’. I just couldn’t skate badly.”

Kim put on a brave face for the presentation ceremony, though chose not to follow jubilant bronze medallist Carolina Kostner of Italy in high fiving Sotnikova, the South Korean later seen crying when she made her way off the rink following a ‘victory’ lap alongside her rivals.

The Vancouver 2010 champion went for a slightly safer routine with six triples to Sotnikova’s seven, however crucially, like Kostner, who finished on the podium for the first time in her third Games, there was no hint of a stumble like the Russian.

“I am stunned by this result, I don’t understand the scoring,” 1988 and 1994 gold medallist Katarina Witt of Germany said from her TV commentators’ booth.

The curling gold-medal tussle saw Canada’s ladies defeat Sweden 6-3 to win their first title since their 1998 triumph when the event was reintroduced to the Winter Olympics.

“We knew we had to step it up and we did. The girls were fantastic,” Muirhead told BBC Sport.

Frenchmen are renowned for their romantic nature, but on ‘ladies day’ at Sochi 2014, the ‘Three Musketeers’ did their best to steal the show with a glorious clean sweep of the prizes in the men’s ski cross.

In a thrilling final, Jean Frederic Chapuis added Olympic gold to his World championship title, before compatriots Arnaud Bovolenta and Jonathan Midol followed him over the line for France’s first Winter Olympics 1-2-3.

In the Nordic combined team event, Norway’s men celebrated their first gold in the discipline for 16 years after they withheld a strong challenge from the Germans.

I came here as a reserve and now I have two golds after two competitions. Amazing

The Norwegians were third behind the Germans and Austrians after the ski jumping which constitutes the first half of the event, but a strong 4x5km cross-country relay saw them edge the Germans out by just three-tenths of a second.

“I came here as a reserve and now I have two golds after two competitions. Amazing,” said Norway’s Joergen Grabaak.

The women’s ice hockey final witnessed an incredible comeback from the Canadian team who scored a deflected equaliser with less than a minute left on the clock to make the score 2-2 and send the game to over-time.

The Americans were the width of a post from taking a 3-1 lead in normal time and were made to rue the missed opportunity because Marie-Philip Poulin dramatically scored the golden goal to give Canada their golden moment.

Having suffered demoralizing defeats in the round robin, including a 9-0 hammering by the USA, Switzerland claimed the bronze with a 4-3 win over Sweden despite having won only two matches in the entire tournament.

As the day drew to a close, Maddie Bowman made it double gold for Team USA in the ski halfpipe after her teammate David Wise had topped the podium two days ago.