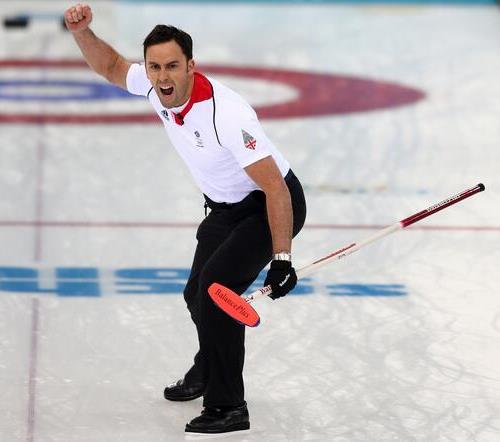 I own this place: David Murdoch Photo: TeamGB/Twitter

There is also the small matter of the men’s ice-hockey semi-finals which includes a repeat of the 2010 final between Canada and the USA.

Canada’s men’s curling team will be looking to follow in the footsteps of their women and become Olympic champions. If they can get past the challenge of Team GB, skipped by David Murdoch, they will win their third consecutive gold.

A win for Murdoch though would be Team GB’s first gold in the men’s event since the first Winter Olympics at Chamonix 1924, which was officially recognised as a title in 2006.

In short-track speed skating, Elise Christie will be hoping it’s third time lucky as she goes for glory in the 1000m.

The 23-year-old Scot was penalised in the 500m final and recorded a ‘did not finish’ in the 1500m but breezed through her heat on Tuesday despite cyber bullying.

Christie has spent much of the last two years top of the world rankings in the 1000m and if she can safely negotiate the quarter and semi-finals, she has got a real chance of winning Team GB a record fifth medal at the Games.

However she will certainly face a challenge from a number of Korean skaters, Italy’s Arianna Fontana and Canada’s Valerie Maltais.

In the men’s 500m, world record holder J.R. Celski will be looking to win USA’s first medal in short track at the current Games.

Russia’s Viktor Ahn would love to upset the American and add to the two medals he’s won so far. There are also medals to be won in the men’s 5000m relay.

In the women’s slalom, Maria Hoefl-Reisch will be looking to defend the title she won in Vancouver four years ago. The German already has one gold to her name at these Games, in the super-combined, but was forced to miss the Tuesday’s giant slalom with a cold and breathing difficulties.

Hoefl-Reisch has confirmed she will compete and will face stiff competition from USA’s Mikaela Shiffrin. The slalom is the 18-year-old’s main event and she is already a world champion.

Austria’s Marlies Schild will also be after the gold medal after winning silver in Vancouver and bronze in Turin in 2006.

World Cup leader Marielle Thompson is one of the favourites for gold in the women’s ski cross while Russia will be looking to retain their Olympic title in the women’s 4x6km relay in front of their home crowd but face stiff opposition from Germany and France.

Meanwhile there are repeats of the last two Olympic finals in the men’s ice-hockey semi-finals. First Finland will be out for revenge when they face off against Sweden, who won the 2006 final between the two countries 3-2.

Then it’s the big one between USA and Canada. The North American rivals produced a stunning final four years ago in which Canada prevailed 3-2 thanks to Sidney Crosby’s golden goal.

Both teams are unbeaten so far, although the USA have made easier work of the countries they have faced as they chase their first gold since 1980.