Sochi 2014: You do not win 12 Olympic medals without being a cool customer and Ole Einar Bjoerndalen has that in spades 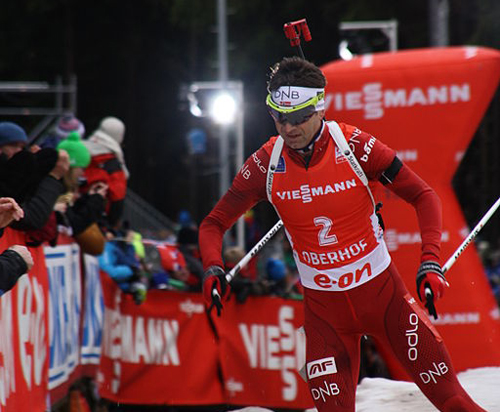 Look beyond the smiling images of athletes killing time over the last 24 hours with the arrival of fog and you will find plenty of tension and nerves.

Among those waiting to compete is Norway’s Ole Einar Bjoerndalen, whose quest to become the most decorated Winter Olympian has been delayed once more with the men’s 15km mass start put back to Tuesday having originally been scheduled for Sunday.

For many athletes the extra day may create extra pressure but with Bjoerndalen you get the impression it will make him even more focused.

He is famed for his mental strength and has even been dubbed boring back in his native Norway where his work ethic is legendary.

For me, [Daehlie] is still the biggest star in Norway and in the world. He’s really a big hero

Last week saw him equal fellow countryman Bjorn Daehlie’s all-time record of 12 Winter Olympic medals and, when the weather allows it, he has three more possible chances to take the crown outright.

He was typically understated after his victory in the 10km sprint last week but you get the impression he won’t be satisfied until the record is his alone.

“I think I’m in the best shape this year for me,” he said after the race. “It was the goal for me to be prepared for the race, this championship. My shooting was almost perfect and the skiing was fantastic.”

His personality could not be more different from Daehlie, who was famed for exuberant style and flamboyant victory dances, but the two have been close friends for over 20 years.

“For me, [Daehlie] is still the biggest star in Norway and in the world,” Bjoerndalen said. “He’s really a big hero.”

Bjoerndalen’s Olympic journey began in 1994 at his home games in Lillehammer but there were no real clues of the domination to follow.

He finished 28th and 36th in two individual races and seventh in the relay but at 20 years old he showed enough potential to excite the Norwegian public.

His Olympic breakthrough came four years later in Nagano with gold in the 10km sprint and silver in the relay.

His blistering performance in the sprint, where he won by more than a minute, alerted the world to the Norwegian’s ability but no one predicted just how dominant he’d be four years later.

Salt Lake City proved to be career defining for Bjoerndalen who took home four gold medals for the individual, sprint, pursuit and relay.

He could even have made it five as he looked good for more glory in a cross-country event but the race was blown wide open by the Spanish winner who later failed a drugs test.

Bjoerndalen tried to keep up with the lightning pace-setter and was second going in to the final lap but couldn’t hold on for a medal.

He became so dominant in the early 2000s that everyone else began to model their training on his and he is credited with turning biathlon into a professional sport.

He was also the first to introduce just one breath between shots instead of the usual two or three. This cut the time for five shots from over 40 seconds down to around 20.

His next Olympic assault in Torino 2006 was affected by flu but he still managed two silvers and a bronze in the individual events and he pushed his tally up to 11 medals in Vancouver with another relay gold and an individual silver.

This brings us to Sochi and the chance for Bjoerndalen to make history on several fronts.

As well as the total medal haul, the 40-year-old has Daehlie’s record of eight Winter Olympic golds in his sights with seven so far.

He has three possible chances with the mass start event and the men’s and mixed relay if picked. If he competes in just two of these events he’ll also break the record for most Olympic events entered in a career.

He is already a legend in Norway – with his home town of Simostranda unveiling a bronze statue in his honour in 2008 –but with all these records possibly tumbling, the next few days could well set his Olympic legacy in stone.