Sochi 2014: Curling is not as it seems, with lower back complaints, sore elbows and groin-related problems all common in the sport 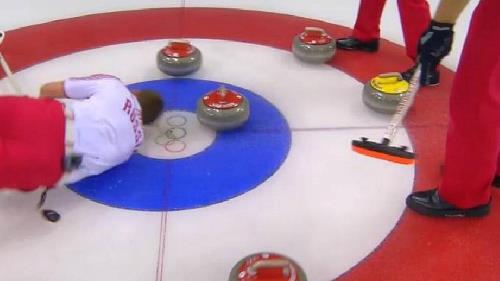 If you think that curling is not a real sport, think again.

A survey conducted by the British Journal of Sports Medicine at the Vancouver Winter Olympics in 2010 showed that curlers are more likely to suffer an injury than ski jumpers and speed skaters.

Those Games will forever be remembered for the sad death of Georgian luger Nodar Kumaritashvili after a luge training run accident.

While curling is nowhere near as dangerous as most other Olympic sports, injuries sustained can certainly hamper the athletes’ performance on the rink.

Common curling ailments include lower back complaints, sore elbows and hands as well as thigh and groin-related problems.

All of these are likely to occur when on sweeping duty, when bending over and vigorously brushing the ice to ensure the perfect slide for your team’s stone.

Or, like Russian men’s skip Andrey Drozdov in this video, you could slip and fall face-first on to the ice.

According to the results, snowboard cross was by far the most dangerous sports, with 35 per cent of the 57 athletes surveyed suffering from injury and illness as a result of the Games.

The survey also revealed that ice hockey players suffer more facial injuries than any other sports, and bobsleigh, luge and skeleton saw a high proportion of neck and back problems.

Sochi 2014: Bjoerndalen in videos – What it takes to be the greatest