Sochi 2014: Without speed skating Dutch would be nowhere in the medal table, prompting many to say take one-sided sport out of Olympics 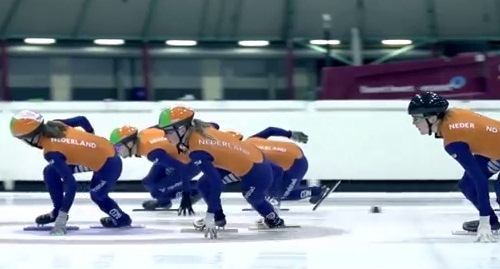 Dutch dominance of speed skating has cast doubt over the future of a sport which has been in the Winter Olympics since it began in Chamonix 1924.

The International Skating Union (ISU) is examining ways to make the sport more exciting after the Netherlands won 23 of the 36 speed skating medals and 8 of the 12 events at the 2014 Sochi Winter Olympics.

The Dutch skaters set five Olympic records, made four clean sweeps of the podium and took home eight golds, smashing the record for the most won by one nation in one sport at one Winter Olympics.

There are fewer and fewer viewers in Germany. The same problems exist in US and Japan. It’s not appealing anymore

It has often felt like they are the only country interested in the sport, something the ISU is understandably determined to change.

ISU President Ottovio Cinquanta told the Associated Press that his organisation will be investigating whether other countries are “sleeping” and not working hard enough to do well.

He accepts that domination by one nation is bad for the sport and wants to provide national skating federations with financial incentives linked to performance.

Cinquanta also plans to broaden the appeal of speed skating with additions like mass starts and mixed events, whilst maintaining the traditional races between two skaters in dedicated lanes.

One of the sport’s main problems is falling interest levels in countries with a history of success such as Germany, the USA and Canada.

All three nations struck gold in Vancouver 2010, and Japan won two silvers and a bronze, but German coach Thomas Schubert said there are now fewer speed skating fans in these countries.

“There are fewer and fewer viewers in Germany. The same problems exist in US and Japan. It’s not appealing anymore,” he said.

American skater Maria Lamb, who finished 16th in the 5000m, blamed management issues and kit problems for their failure to win a single speed skating medal at the Sochi games.

It is the USA’s most disastrous performance in the sport since failing to win a medal at Sarajevo 1984.

Lamb said there has been so much “nonsense” going on at the US Speedskating organisation in recent years that they have been more a hindrance than a help to the athletes.

After Vancouver, nothing happened. We don’t have new ice rinks or nothing. It’s very sad

“With the team, we were all capable of more than we’ve shown here. I’ve watched them be defeated by some of the leadership in the organisation and it’s heartbreaking for me,” she said.

“Mark Greenwald caused a lot of damage to the organization by treating people wrong or just outright pushing them out,” Lamb said.

She continued: “Finn Halverson has done a lot of damage the way he has single-handedly perhaps destroyed so many good athletes, at least their performance here at the Games, due to a lot of his calls and actions.”

To make matters worse, the US team started in Sochi with new high-tech outfits but changed back to their old World Cup skinsuits after disappointing results.

Three-time Czech Olympic champion Martina Sablikova won one gold and one silver medal at the Sochi Olympics but said very little has been done to advance the sport back home.

“After Vancouver, nothing happened. We don’t have new ice rinks or nothing. It’s very sad,” she said.

Dutch team official John Van Vliet sought to defend his country’s success, and was keen to emphasise the nationwide fervour partly responsible for one of the most one-sided programmes in the history of any Olympic sport.

“In the Netherlands, speed skating is even more popular than football in winter. When there is natural ice, we have many races every day,” said Van Vliet.

“When the Olympics were held in Sapporo (1972), many people set their alarm clocks and got up at 4 a. m. to watch the competition.

“My kids told me that schools let the children go earlier so they can watch the competition on TV. I heard that viewing figures for the Olympics are unbelievable. About 30 percent of the people watched the competition.”

Unfortunately for speed skating, the rest of the world is switching off.