Sochi 2014: Stefan Groothuis leapt high into the air after winning gold, knowing he had left suicide thoughts well behind 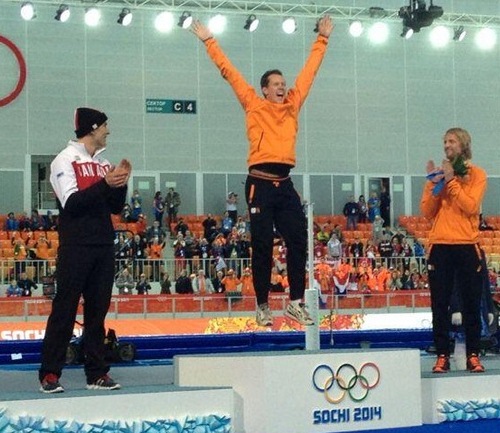 When Stefan Groothuis stepped onto the podium after the 1000m speedskating final on Wednesday, he celebrated not only his first Olympic gold success but also his triumph over depression.

A series of freak injuries and illnesses plagued the Dutchman’s sporting career as he suffered from mental health problems and even contemplated suicide.

However, the 32-year-old overcame his demons at the Adler Arena to set a track record of 1 minute 8.39 seconds to finally announce himself on the elite stage.

I think I was very close to suicide. It’s shocking to say that. Anyone can create a hell inside their head, and it all goes pitch black

“When I was 25, I was close to the top and then I injured my achilles. It took me one-and-a-half years to come back,” he said.

“A year later, I suffered from depression. It was a strange time because in the same year we had our first son. I’m so happy I overcame that. I have two great kids and now I’m Olympic champion. It’s just great.”

The Dutchman finished fourth in the 1000m at the 2010 Vancouver Games but his progress was halted when he broke his right leg before later contracting a viral infection.

However, the injury problems certainly looked behind him on Wednesday as he set a blistering pace to storm into the lead, but with four pairs to go, including two-time Olympic champion Shani Davis, he was forced to look on agonisingly from the sidelines.

Canadian Denny Morrison came within 0.04 seconds of stealing the lead but there would be no stopping Groothuis from enjoying his special day as Davis stumbled to eighth, while final challenger Denis Kuzin of Kazakhstan failed to beat his time.

Groothuis cried out an massive “Yes!” on watching the last of his fellow competitors falter before grabbing coach Jac Orie and then embracing his wife Ester, with the Dutch flag draped over his shoulders.

“She went through enough bad times,” he added. “I am so thankful that she has been there for me all this time.

“I think I was very close to suicide. It’s shocking to say that. Anyone can create a hell inside their head, and it all goes pitch black.”

Groothuis’ achievement continues the Netherlands’ domination in speedskating at the Sochi Games as it signals their fourth gold medal in five events.

He finished 38th in the 500m event after falling in his second race but will be hoping to build on his 1000m success when he competes in the 1500m sprint on Saturday.