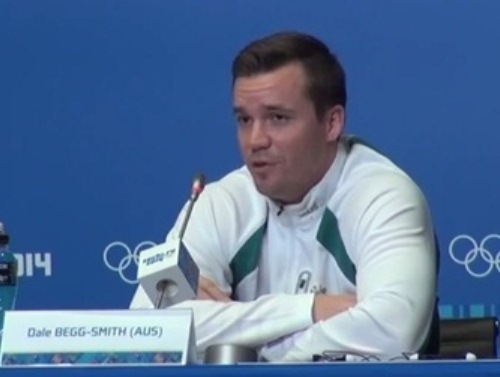 Dubbed ‘the most mysterious man of the Winter Olympics’ in Vancouver it seems Dale Begg-Smith remains something of an enigma four years on.

The Canadian-born athlete took the gold medal in Torino and silver in 2010 competing for Australia in the moguls.

But since then Begg-Smith has only been back to the country he moved to aged 15 twice, preferring to shun the spotlight while spending time in North America and living in the Cayman Islands.

I see myself as Australian, but I move around, I’m not locked down to one place

“I see myself as Australian, but I move around, I’m not locked down to one place,” he said at a rearranged conference after a mix up at the airport which saw him leave without speaking to the media.

The 29-year-old has a highly successful business away from the slopes and the fact that they were linked to the spamming only adds to the list of unanswered questions surrounding him.

After a three-year break from the sport to let his body recover, Begg-Smith decided to return to the sport due to the pull of the competition.

“During those few years off I got to the gym quite a bit, staying in shape and things came back fairly easily,” he explained.

“I’ve been paying attention to the other guys on the team. I saw the team improving. You get the itch when the Olympics are coming up.

“The sport has changed in the last few years. It’s more jumps than turns: when I was competing before it was 50% turns.”

Though the dual mogul world champion in 2007 prefers to fly under the radar where possible his teammates are effusive in their praise of him.

“Dale’s been a bit of a mentor for me over the past six or seven years,” fellow freestyle skier Matt Graham said.

“He’s given me some coaching advice and helped me out whenever I need to.

“We have talked a bit over the years via email post-competition so it’s good to have Dale back. He definitely brings a good vibe to the team.”

In fact despite the mystique aspiring skiers like Graham were inspired by Begg-Smith’s winning performance in 2006.

“His 2006 medal was definitely an inspiration for a lot of Australian moguls skiers,” Graham explained.

“Australia wasn’t really known for moguls skiing back then and after he won the gold we got a big flurry of young skiers coming to the sport.

“At the time I was already in the sport and watching him win definitely motivated me to follow in his footsteps.”