Sochi 2014: Alexander Ovechkin leads Russia ice hockey stars into battle on Thursday with a $50 billion burden on his shoulders 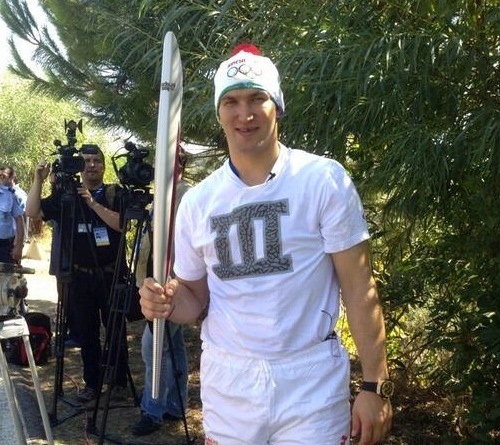 As faces of the Olympics go, Alexander Ovechkin’s epitomises Russia: rugged, and one that’s taken a few hits over the years.

Sidney Crosby had that honour in 2010 and his laid-back, boy-next-door image was perfect for Vancouver. Cathy Freeman summed up Australia for Sydney 2000 – multicultural, patriotic and with a deep-seated passion for sport.

Crosby and Freeman, along with Jessica Ennis-Hill at London 2012, dealt with the weight of the nation on their shoulders well by winning gold in their sports in front of their home crowd.

Whoever hosts the Olympic Games probably has the most pressure and we are in the same position that Canada was in four years ago. But I am pretty sure we have the experience and we are old enough to handle that pressure

However Ovechkin’s career thus far has seen him play the bridesmaid on more occasions than he would care for.

At 28 years old, the Washington Capitals forward still has much of his career ahead of him, but in eight years playing in the NHL he is yet to appear in the Stanley Cup finals and has two disappointing Olympic campaigns to his name.

In 2006, at the tender age of 20, Ovechkin’s Russia finished fourth behind Sweden, Finland and the Czech Republic. Their star forward scored five goals in their eight games, but recorded no assists in the competition.

Four years later the Russians surprisingly exited at the quarter-finals stage to the eventual winners Canada, with Ovechkin scoring two goals and two assists in four games. He has been mocked on NHL fan forums ever since.

The NHL took an unprecedented mid-season break in 2010 to allow their athletes to compete in the Olympics, but with no such break guaranteed heading into the Sochi games, Ovechkin took matters into his own hands.

He publicly stated that he would breach his contract with the Capitals in order to compete. He didn’t care about the threats of fines and suspensions by the NHL, that is how badly he wanted to compete on home soil.

And after arriving in Russia on Monday Ovechkin was bullish about the Russian hopes on the ice, claiming that a gold medal in hockey would justify the Games’ vast price tag.

“Whoever hosts the Olympic Games probably has the most pressure and we are in the same position that Canada was in four years ago. But I am pretty sure we have the experience and we are old enough to handle that pressure.

“I was very young when I took part in Turin, it was my first big tournament and a very significant one. Vancouver was a different story. Not only did I have a lot of pressure on me, there was pressure on all of us.

The Russians face off against Slovenia on Thursday, before they play the US on Saturday, whose team features Ovechkin’s Capitals teammate John Carlson.

With his face plastered around Russia on billboards and $50 billion resting squarely on his shoulders, Ovechkin will hope that the pressure does not get the better of him this time.