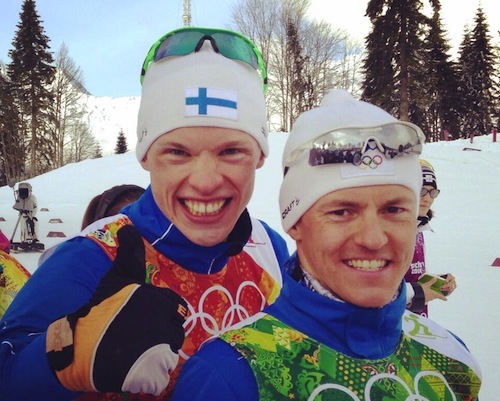 With the majority of the country’s landmass seeing upwards of 120 ‘snow days’ it is somewhat surprising to hear that Finland failed to win a gold medal in both the Turin and Vancouver Winter Olympics.

The 12-year wait since Finland’s last winter golds – four of them in Salt Lake City – came to an end when Sami Jauhojaervi and Iivo Niskanen crossed the line first in the men’s cross-country team sprint final.

But it was not without a bit of controversy.

Skiing is easier than cheering for our [male] teammates. It was tough watching them

The Germans posted an official appeal against the decision after Tim Tscharnke appeared to trip over Jauhojaervi’s ski close to the finish.

But the International Ski Federation rejected the protest, meaning that the Germans had to settle for seventh place as the Fins celebrated their win.

“I was ahead, so I think it was a legal move,” Jauhojaervi said of the incident.

“It was fun to do something that you might not expected. My emotions have been up and down – mainly up.”

Niskanen said: “Sami was fantastic in the last lap.

“Everything was perfect. He was really fast on the last uphill and made it [to the end].”

Earlier in the afternoon, Niskanen’s sister Kerttu won silver with Aino-Kaisa Saarinen in the women’s team sprint behind the Norwegian pair of Marit Bjoergen and Ingvild Oestberg.

“We were trying to get gold but Norway were very tough to beat,” Saarinen said.

“Skiing is easier than cheering for our [male] teammates. It was tough watching them [on their way to win gold].”

Despite the relative lack of medals won by the Fins, the games themselves have been attracting so much attention in the Finnish cities of Turku and Tampere that government officials have had to ask people to stop watching so much.

More than 300,000 people have downloaded the Olympic video player applications to their smartphones, streaming up to three million times per day.

Announcements were made on the nightly news broadcasts in the cities asking citizens to stop streaming the channel as it was sucking up too much bandwidth and having an adverse affect on the country’s operations.