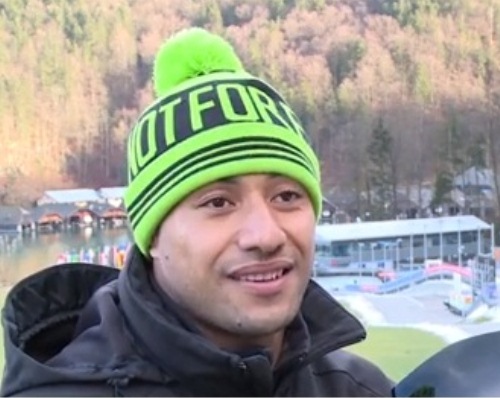 Denied a spot in Vancouver 2010 when he crashed in qualifying, Banani became the first athlete from Tonga and the first luger from a Pacific island nation to participate in the Winter Games.

The 26-year-old achieved a time of 53.656 seconds in his first of four runs, putting him in 34th place out of 39 competitors, 1.486 seconds behind leader Albert Demchenko of Russia.

The man with “coconut powered underpants” has attracted worldwide acclaim after changing his name from Fuahea Semi to the German underwear manufacturer as part of a marketing campaign.

Responding to a plea from Princess Salote Mafile’o Pilolevu Tuita who desired a Tongan athlete to represent the nation for the games, Banani agreed to move to Germany where he began training with their national squad in 2009.

“Everyone thinks I’m crazy, not just because of the cold but also because of how dangerous and fast the sport is,” he said.

“It’s not just about being here and getting to the finish line. I know my limits and five years is not enough to get to the next level. If I make the top 30 I’ll be happy.”

There was not such good fortune for Chinese Taipei athlete Lien Te-An, however, as his disastrous first run where he slipped off his sled, left him a soul-destroying 10.791 seconds off the lead.