Sochi 2014: From Russia but no love – the golds that got away for the hosts

Sochi 2014: The home nation are struggling for gold medals, but their former young stars are now winning gold for other countries 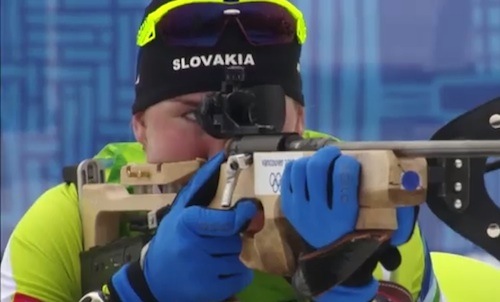 Russian athletes have won five gold medals so far at Sochi 2014, yet the Russian Federation only have two to their name in the medal table.

It’s a case of ‘The Ones That Got Away’ for the hosts, as three athletes have won gold on their native soil, but competing for other countries.

I get homesick from Switzerland. I can’t stay away from home for longer than two to three weeks.

Podladtchikov is the odd-one-out of the three, as the 25-year-old actually competed for Russia at the 2006 Turin games at the age of 17, when rival Shaun White won his first halfpipe gold.

‘I-Pod’, as he’s known by his fans, vowed never to compete for Russia again and took up Swiss nationality the following year.

The root cause of the defections seem to lie at the Russian authorities’ inability to keep their talented youngsters happy. In a country of over 143 million, which spreads nine time zones, Podladtchikov, Kuzmina and Domracheva departed because of a lack of support and a lack of opportunity to progress in the Russian system.

Podladtchikov was born in Moscow, but at the age of three his parents moved to Sweden, then the Netherlands and then on to Switzerland, where they settled in Zurich with Iouri aged nine. He took up snowboarding full-time aged 16 and won a place at the Olympics in 2006, where he scored a combined 14.6 points, out of 200, in his two qualifying runs.

Admittedly he was carrying an injury from a crash the night before the competition, for which the Russian doctors berated him for, and after the ordeal he turned his back on Russia to compete for the place he called home, Switzerland.

Kuzmina, born Anastaysia Shipulina, hails from the Siberian city of Tyumen, an area which has produced many of Russia’s greatest biathletes. Having competed for Russia in junior competitions she grew frustrated with her lack of progression and defected to Slovakia, winning gold medals in both Vancouver 2010 and Sochi 2014. Her brother Anton Shipulin still competes for Russia in biathlon, finishing fourth and 14th in the sprint and pursuit.

Domracheva, however, was actually born in Minsk, Belarus, but moved with her parents to Siberian town of Nyagan, where she fell in love with cross-country skiing and biathlon. Like Kuzmina, Domracheva represented her adopted country at junior level, before being snapped back up by the Belarussian system, who had noticed her progression.

Podladtchikov says that he still misses Russia, and enjoys returning to his homeland, but insists that he sees himself as Swiss.

“I get homesick from Switzerland. I can’t stay away from home for longer than two to three weeks. My heart is there.

“I’ve heard people yelling in Russian, ‘Go Iouri’ and it really pumped me up. They were cheering for everyone, it’s great.”

“I love speaking Russian, it’s my mother tongue – it reminds me of so many things. When I’m [in Russia] it reminds me of things I’ve almost forgotten, like when you were at the table with your grandmother and she cooks you some stuff your mother couldn’t, or s omething like that.

“It’s really beautiful, that’s what it is.”

The Russians will not struggle for medals in these games, but with the ones that got away they could have been punching a lot higher up the medals table.

Sochi 2014: Love is in the air! Athletes distracted by matchmaking app