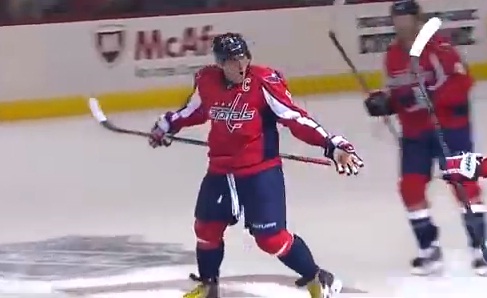 Seven is a lucky number in Russia and it took Sochi posterboy Alexander Ovechkin just 77 seconds to make his mark on the Games as he scored with his first shot of his country’s Olympic ice hockey tournament.

Slovenia however rallied early in the second period, outscoring their opponents 2-1 to set up a tense final 20 minutes.

Russia’s dominance in front of goal, underlined by their 35 shots to Slovenia’s 14, eventually helped them to a 5-2 opening victory, however no one was happy with the overall performance.

“After we got the lead at 2-0, we played more casual and we can’t do that in future,” said Ovechkin.

“The first game is always hard, we played against a good team, a hard-working team and it was a good lesson for us.”

Defenceman Anton Belov had stronger words for his teammates, especially after they were run ragged by the Slovenians in the second period.

“Everybody saw how after two goals we sort of calmed down and lowered our tempo. A serious team should not do such things,” he said.

Despite their apparent dissatisfaction, Russia will secretly be relieved to have got their campaign underway unscathed and will attempt to recreate the high-tempo play seen early in the game when they face stiffer opposition later in the tournament.