Sochi 2014: Short track dynamo Elise Christie can put upsetting Olympics behind her with victory in 1,000m, her favourite event 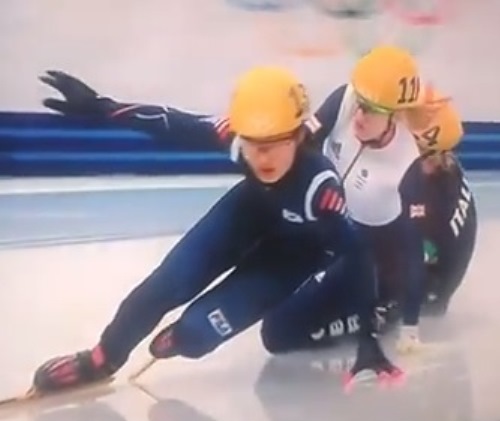 Coach Nicky Gooch believes Elise Christie has got the tactics to beat the best in the world at the Winter Olympics today but admits it will not be easy.

Christie won her 1000 metres heat but faces a quarter-final that includes long-track gold medallist Jorien ter Mors and South Korea’s Seung-Hi Park, who she brought down during the 500m final (see above picture).

Last season, European champion Christie won the overall World Cup title and claimed bronze at the World Championships at 1000m, but her pace-setting tactics have since been revised and Gooch believes it is finally paying off.

In Britain, footballers and cricketers, it’s their job every weekend, they’re in the press. For our guys, it’s once every four years. It did get into her head, the things people were saying to her

“She is just focused on doing her best, getting the tactics right and keeping her head straight,” said Gooch.

“We’ve worked to bring more dimensions to her tactics and make her a more complete skater, and taken some of the predictability out – she’s a strong skater and last year was racing from the front, and people soon worked that out.

“We’ve added to her locker; she is not as predictable. She can develop tactics as the race develops. Every race can be different and she has the skills to adapt now.”

Gooch says Christie is physically ready for her last bid for a medal in Sochi but admits the mental battle after a difficult Games could be tougher to win.

The 23-year old was disqualified in the final of the 500m, then skated fractions outside the finish line to be ruled out of the 1500m.

But she claims it is the abuse she has received on Twitter that has hit her the hardest.

“We’ve been working hard with Elise after everything that has happened. The whole team has been involved, from the psychologist to the coaches and the other athletes,” added Gooch, the last British skater to win an Olympic short-track medal – a 500m bronze 20 years ago in Lillehammer.

“She is a very honest athlete, says what she’s thinking, and we wouldn’t change who she is. We’ve told her not to let things get to her and to try to prove a point.

“In Britain, footballers and cricketers, it’s their job every weekend, they’re in the press. For our guys, it’s once every four years. It did get into her head, the things people were saying to her.

“Even without those problems it is still going to be tough. She is skating well enough but the racing is difficult here; we’ve had world and Olympic champions fall over. There are no guarantees.”