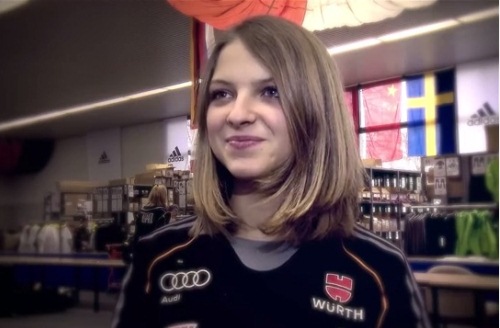 In sport it is usually a matter of millimetres that make the difference but for Gianina Ernst, the youngest competitor at Sochi, it was a couple of hours.

Had the German athlete been born a little later she would not be able to compete in the Olympics, as at 15-years-old Ernst only just made the age limit for the games.

The ski jumper turned 15 on December 31, scraping past the rule which states that to be eligible to participate in Russia you had to be 15 or older in 2013 to take part.

I have to concentrate my attention on training. I have no free time to talk to my parents

“It’s special, it’s good, I like it. My classmates are happy for me and are watching me on TV,” Gianina said after training on Saturday.

“I get a lot of attention at school. I’m having to read my school books during my free time when I’m bored.

“I have to concentrate my attention on training. I have no free time to talk to my parents.”

The school girl comes from a family with pedigree in winter sports as her dad, Joachim, participated in the 1982 world championships for West Germany in the ski jumping and her mother, Cornelia Thomas, was a cross country skier for Switzerland at the Lake Placid Olympics.

Gianina, who grew up in Oberstdorf, took up German citizenship in June 2013 to be eligible for selection.

In December 2013 she took second in her first World Cup appearance in Lillehammer, the best result ever for a female German ski jumper at a World Cup, which was enough to qualify for Sochi.

The couple have six children and Gianina’s older brother, Benjamin, also a ski jumper, represents Switzerland but did not qualify for the games.