Sochi 2014: Gold for Lizzy Yarnold, but she still has to pay her rent 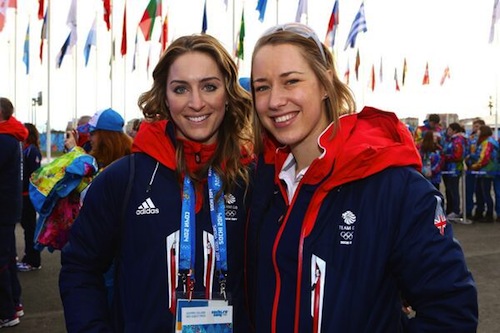 Williams and Yarnold: "Any chance of discounted rent, Amy?" Twitter/TeamGB

It’s not often that an Olympian gets to emulate the achievements of their landlady, but that’s exactly what Lizzy Yarnold did by winning the women’s skeleton gold medal.

Yarnold is letting a house from Vancouver 2010 champion Amy Williams in Bath, where she is training at the city’s university, which has produced British skeleton talent for over a decade.

The 25-year-old led the competition from start to finish, setting two track records in the process. She got off to an explosive start on Thursday in her first run of 58.43, almost matching it in her second.

I’ll be knocking on the door [if she doesn’t win]. I might give her a few months leeway.

Then in her third run on Friday she set another track record of 57.91 to give her a lead of 0.78 seconds over Noelle Pikus-Pace going in to the final run.

And she sealed her impressive victory with a final run of 58.09, not her cleanest run, but was enough to secure the gold by nearly a second ahead of Pikus-Pace and Russia’s Elena Nikitina.

Williams had jokingly threatened to evict her tenant if she failed to retain the gold medal for Great Britain.

“I’ll be knocking on the door,” Williams told Reuters, in jest. “I might give her a few months leeway (to get out).”

Sochi 2014: Say cheese! #sochiselfie is the Twitter hit of the Games