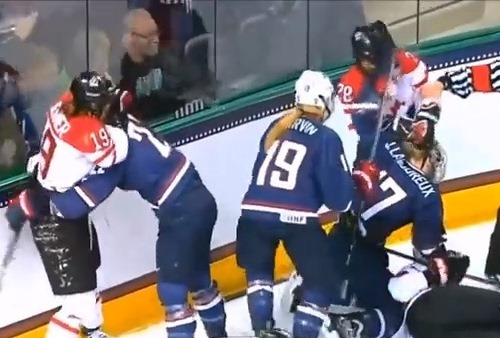 Canada inflicted defeat on neighbours USA 3-2 in a prelude to next week’s semi-final between the juggernauts of women’s ice hockey, a match-up that will likely crown the Olympic champions.

Birthday girl Megan Agosto raced clear to score the decisive goal for the defending Olympic champions as they rallied from a goal down and held off a late American fight back.

The dominant pair have competed in three of the four women’s hockey Olympic finals – such is the dominance of the two neighbouring nations.

Any game against Canada, whether you are playing in Timbuktu, with no one in the stands, or playing in front of 12,000 or 15,000 people, you get up for it

Such is the intense rivalry between the two, the preliminary clash was a fiery contest that both sets of players were desperate to win.

“Any game against Canada, whether you are playing in Timbuktu, with no one in the stands, or playing in front of 12,000 or 15,000 people, you get up for it,” said U.S. forward Monique Lamoureux.

Canadian coach Kevin Dineen further put the rivalry into context: “Every single game I’ve seen against the US has been a really hard-fought contest, a lot of personality too, some of them not what you usually see in the women’s game.”

“But certainly there is a great rivalry that’s been talked about a lot, and it’s nice to see it in action.”

USA defenceman Gigi Marvin summed up the mood of the team as they attempt to pick themselves up and avenge the defeat in the knock-out stages.

“We’re prepared, we’re excited to go out and compete together as a team, you take the past and you use it and you build from it.”

Just like match-ups in the past the semi-final is sure to be full of physical altercations with both nations desperate for glory.