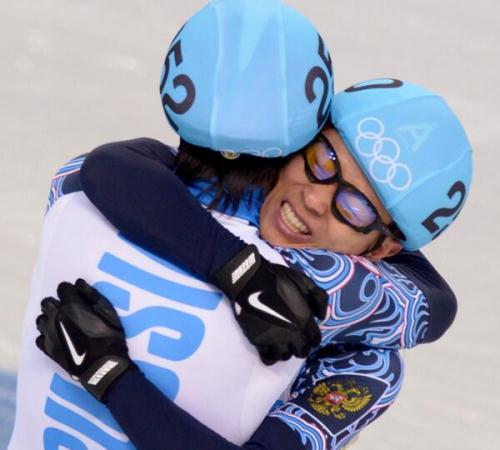 Since its introduction at the 1992 Winter Olympics in Albertville, France, short-track speed skating has been dominated by four nations – South Korea, Canada, China and the USA.

Of the 120 medals on offer in the six Games since, 104 have been won by athletes from these nations.

But with three medal events still to go, Sochi 2014 has already seen a new record set in the sport. Countries from outside the big four have won seven medals, beating the previous best of four, while the USA are yet to get on the medal table.

The first thing I did was improve their techniques. Previously they did not pay attention to that

Russia have won medals in short-track for the first time, Viktor Ahn winning bronze in the 1,500 metres before leading home a one-two in the 1,000 metres with Vladimir Grigorev.

Sjinkie Knegt’s bronze in the same event was the Netherlands’ first short-track medal while the experienced Arianna Fontana has won three medals for Italy.

The increasing competitiveness of these nations may be due to the proliferation of foreign coaches which Li Yan, China’s coach, believes helps to bring new ideas to training.

“I had a Korean coach, a Canadian coach and American, Dutch, Japanese and Chinese coaches,” he said.

“North American-based training focuses on training science, so strength and speed are number one. In Korea, China and Japan, they also focus on sports science, but they focus more on athletes’ feeling and on creating a strong heart to win.

“There is definitely an eastern influence there.”

Russia’s rise at their home Games has no doubt been assisted by the arrival of Ahn, who won three golds and a bronze at the 2006 Winter Games competing for South Korea.

But the arrival of French coach Sebastien Cros has also had a huge impact. After less than a year in charge, he coached the Russian team to third place in the 5,000 metre relay at the 2013 World Championships. They have a good chance of a medal in the Olympic relay final on Friday.

Kazakhstan’s Korean coach Jang Gwon Ouk has led the country to the A final of the 5,000 metre relay, giving them a chance to get their first short-track Olympic medal.

And the Hungarian team believe they have brought their strongest ever squad to Sochi after hiring Chinese coach Zhang Jing two years ago.

“The first thing I did was improve their techniques,” Zhang said. “Previously they did not pay attention to that.

“The second thing was to show them how to compete. In the past they had little understanding of how to skate during the competition.

“China and South Korea are more advanced in this field [but] now the Hungarians are beginning to understand that.”