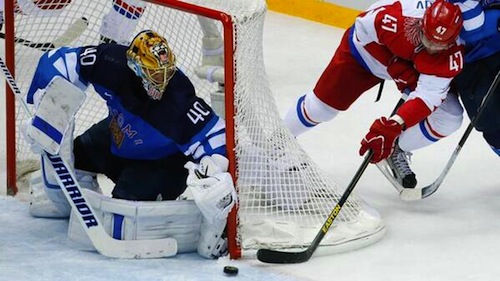 The Games are over.

Well, at least for Russian ice hockey fans after the hosts were well beaten 3-1 by Finland in the quarter-finals – the same stage at which they exited the Vancouver games in 2010.

It was the gold medal that the Russians wanted. The one that star player Alexander Ovechkin said would justify the Games’ $50bn price tag.

Emotions? At the moment I don’t have any emotions

But it wasn’t to be as a lacklustre Russian team failed to break down a resolute and disciplined Finnish side who clearly hadn’t read the script.

The hosts took the lead through Ilya Kovulchuk in the eighth minute but the advantage only lasted two minutes as the Fins drew level through Juhamatti Aaltonen.

They then went behind before the end of the first period, when 43-year-old Teemu Selanne put the puck past Semyon Varlamov.

The Anaheim Ducks veteran is competing in his sixth Olympics, having debuted in Albertville 1992, and won the silver medal in Turin 2006, as well as a pair of bronze medals in Nagano 1998 and Vancouver 2010.

Mikael Granlund then extended his side’s lead early in the second period, prompting the Russians to replace goaltender Varlamov with Sergei Bobrovski, who stemmed the flood of goals.

But the Russians could not penetrate the stout Finnish defence, swapping their formations on the ice to no avail, and even taking off Ovechkin and Evgeni Malkin in order to save some strength for their second-string formation.

“It’s all bad,” said Ovechkin, the NHL’s most valuable player in three of the past six seasons.

“We started well, with a goal. But a few mistakes cost us the game. We tried to score, but just couldn’t manage it. Emotions? At the moment I don’t have any emotions.”

President Vladimir Putin was in attendance at the Bolshoy Ice Dome for what was supposed to be a regulation advancement to the semi-final. But he was left looking somewhat dejected…

Maybe this is a good time for the … KISS CAM! RT @b_judah: Putin and Medvedev watching the Hockey. pic.twitter.com/RxSH3aATp2

Posterboy for the games Ovechkin rounded off another disappointed Olympic campaign for himself, finishing the tournament with just one goal – which he scored in the 77th second of the first game.

The Games go on, but for Russia the golden dream has finished.