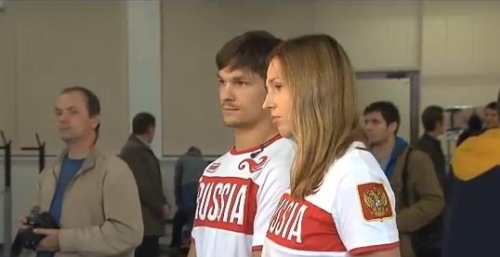 Russian husband and wife Vic Wild and Alena Zavarzina became the first married couple since 2002 to both scoop medals in the same Olympic event when they won snowboard parallel giant slalom gold and bronze respectively.

Wild was born in America but became a Russia citizen two years ago gave and his victorious run gave his adopted nation their first gold in a snowboard event.

He has had the most incredible journey. He deserves it more than anyone

“I want to thank Russia for giving me the opportunity to win a gold medal,” the 28-year-old said.

“I am so happy Russia gave me an opportunity to compete in snowboarding in the Olympics. Russia has supported me so much during recent years.”

Zavarzina faced a nervous wait to find out whether or not her husband was going for a medal after picking up her own.

“I was pretty sure he got there. I wasn’t sure if he was in small or big final until I got down (the course) and talked to the media,” she said.

“He has had the most incredible journey. He deserves it more than anyone.

“It’s the craziest day of my life.”

Wild was, you guessed it, stoked to find out that his wife had a medal despite her breaking her arm in January.

“I was so stoked. I would rather we both have a medal than just one of us,” he said.

“My wife and I won medals. You can’t ask for more.”

The man from White Salmon, Washington, decided to compete for Russia partly because the United States Ski and Snowboard Association chose to cut funding to alpine snowboard racing a few years ago.

Of the 98 events at the Sochi games there are only four that do not have any participants from America with two of them being alpine snowboard disciplines.

“I didn’t have the support I needed. The USOC and the USSA do a great job but not everyone can be happy. I don’t hold a grudge. I am here now doing what I want to do and it’s all good,” Wild said.