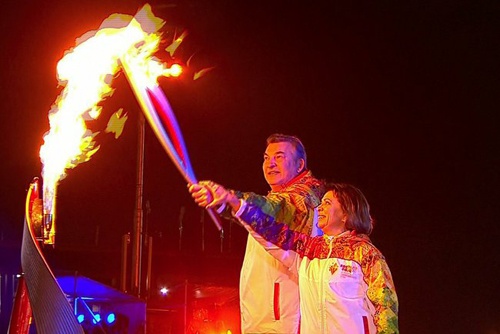 Irina Rodnina, the former figure skating champion who lit the Olympic flame, has responded to the controversy over her racist Barack Obama tweet by claiming her account was hacked.

The tweet, which showed Obama eating with a banana superimposed into the shot, was removed from her account last September after it hit the headlines.

The controversy was reignited this week however when the Russian was chosen to light the Olympic flame along with Russian ice hockey legend Vladislav Tretyak.

It appears this has lead Rodnina, a member of parliament for Vladimir Putin’s United Russia party, to re-think her stance.

She tweeted on Monday: “I respect the Obama family and apologise for not clearly stating earlier that I don’t support the tweeted photo or racism in any form. My account was hacked and I should have shown better judgement in my initial response and handling of the event.”

Sochi 2014 President Dmitry Chernyshenko had earlier defended the decision to choose Rodnina to light the flame.

“Irina Rodnina is from the club of three-times gold medallists and one of the most respected in the world,” Chernyshenko told reporters.

“The Olympic Games are not about politics,” he said.