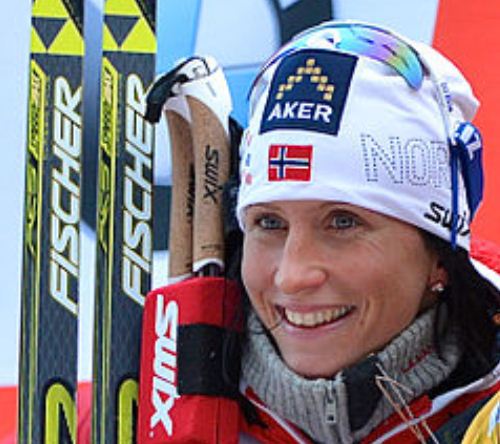 The Norwegian pair put in a commanding display of cross-country skiing, winning with a 9.09 second advantage over Finland in second with Sweden taking the bronze.

Bjoergen, who is known as ‘The Iron Lady’, has now won nine Winter Olympic medals in her career, adding this to her win last week in the women’s 15km skiathlon and her three golds in Vancouver 2010.

We have the strongest team ever. Maybe this is my last Olympic medal but I’m happy to take it with Ingvild

The 31-year-old is third in the list of most medals by a female winter Olympian, trailing former cross-country pair Raisa Smetanina and Italian Stefania Belmondo on ten.

Bjoergen expressed surprise at winning the relay, praising the work of the Norwegian wax technicians for solving issues that had previously affected her skis.

“It was incredible. I didn’t think it would be possible to fight for the gold medal but we had perfect skis – the waxing guys did a great job,” she said.

“We had some problems previously but they worked very hard. I’m proud of the whole Norwegian team.”

Bjoergen also hailed the superiority of her country’s cross-country team, with Norway leading the way in the discipline with four golds in Sochi and becoming the first nation in history to win a medal in all 12 cross country events.

“We have the strongest team ever. Maybe this is my last Olympic medal but I’m happy to take it with Ingvild,” added Bjoergen.

Oestberg, competing in her first Winter Games at 23 years old, added her first Olympic gold medal to the silver she won in the individual Ladies’ Sprint Free.

“I can’t believe it. It’s my first Olympics and to get silver and now a gold is amazing,” said Oestberg.

The win gives Norway their eighth gold of the Games and puts them first in the medals table ahead of Germany in second.

Meanwhile in the men’s team sprint, Finnish pair Iivo Niskanen and Sami Jauhojaervi won gold and Russia finished second after leaders Germany had a spectacular collapse on the final sprint.

Tim Tscharnke fell on the final sprint after a clash with Jauhojaervi as the Germans eventually finished a disappointing seventh. Sweden took the bronze.