Sochi 2014: Jamaica! We have a bobsled team… just no luggage 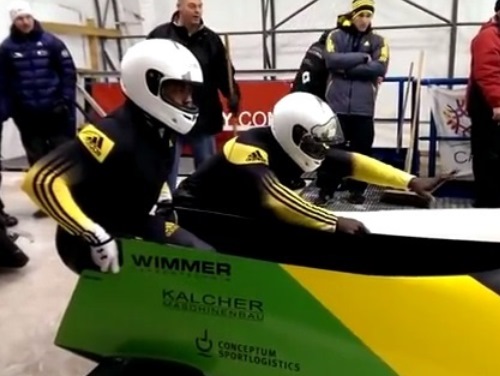 Much like the world-famous Jamaican bobsled team at the Calgary Winter Olympics in 1988 that were the feature of the ’93 classic film ‘Cool Runnings’, their modern day compatriots have bumped into unexpected problems even before the competition has started.

Veteran driver Winston Watts, 46, who competed at the 1994, 1998 and 2002 Games then came out of retirement two years ago to qualify for Russia and brakeman Marvin Dixon, 28, will compete in the two-man bob in Sochi.

Jamaica last made a bobsleigh appearance at the 2002 Salt Lake City Games though Watts is clearly not in Russia just to make up the numbers and was upset about the bag blunder which prevented them from training.

It’s really frustrating. We have just got all the funding together and have arrived at the Olympics – but then this happens

“It’s really frustrating. We have just got all the funding together and have arrived at the Olympics – but then this happens,” he said.

“The sled is here, but our blades that go on the sled aren’t and neither is the clothing that we wear when we slide.”

Also like their countrymen in the film depiction, Jamaica had to scramble to get enough money together and last month the public donated more than £60,000 after a plea from the team.

The dymanic duo are hopeful of a Thursday training start ahead of the opening ceremony on Friday and with the two-man competition scheduled to begin on Sunday February 16.