Sochi 2014: Johnny Quinn breaks through door after getting trapped 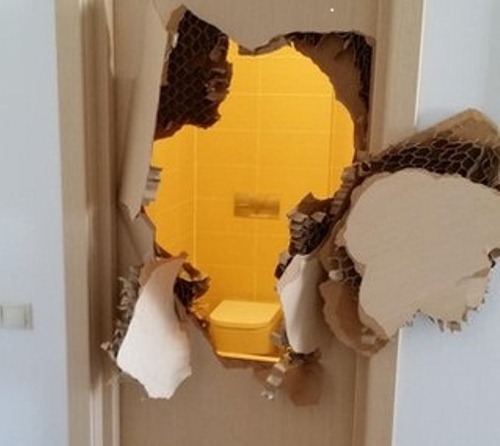 An American bobsledder had to force his way out of a bathroom after the door jammed leaving him no option but to make a hole to escape.

Johnny Quinn,30, was trapped without a mobile phone in his accommodation in the athlete’s village and, with his roommate absent, had to smash his way out.

“I was taking a shower and the door got locked/jammed…,” he tweeted.

I used my bobsled push training to break out

“With no phone to call for help, I used my bobsled push training to break out.”

Quinn, a former NFL and CFL player, joined the American bobsleigh team in 2010 after he sent a training video to then bobsleigh athlete Chuck Berkeley.

His Team USA roommate Justin Olsen stated on Facebook that the pair had had problems with the door before.

“My team-mate and room-mate had an issue with our door. I knew something would happen,” he wrote.

“I wasn’t there to help him out, at the gym. Trust me, he tried everything.”

Meanwhile Team GB Bobsleigh athlete Bex Wilson, who competes in the two-woman version, came across an open lift shaft in her block.

“Paula Walker nearly didn’t have her brakewoman after walking out into this,” she tweeted alongside a picture of the empty space.

There have been numerous issues reported with accommodation for those attending the games including the unusual twin toilets.