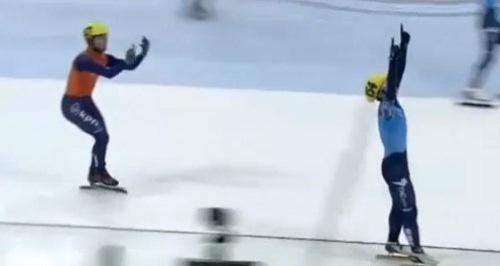 Last month Dutchman Sjinkie Knegt was disqualified from the European short track speed skating championships for making ‘an obscene hand gesture’ at Viktor Ahn after the Russian pipped him to the line in the 5000m relay.

Today Knegt found himself crossing the line third, trailing Ahn again, but this time rather than a hand gesture he skated with all his might to win his country’s first ever short track Olympic medal.

The fact that the Dutch have never won a medal in this format of skating is quite remarkable given their domination of the long track variant of the sport, where they have won 12 medals so far in these Games.

Skaters from the Netherlands seem to enjoy skating against the clock more than they do against other people. They seem to enjoy the grace and personal aspects of long track over the carnage and unpredictability of short track.

“This is the first short track medal for the Netherlands, and I still can’t believe it.”

The race saw Ahn win his fourth gold medal of his career, becoming the first Winter Olympian to win gold medals for two different nations having won his previous three golds for South Korea in Turin 2006.

Ahn and fellow Russian Vladimir Grigorev led the race from the start, taking turns at the front to share the workload, before Ahn took over in the final few laps to take the win.

Knegt surprised China’s Dajing Wu by sneaking through on the inside to take the bronze medal.

“I had no idea Russia was such a strong short track country,” Ahn said.

“It’s my first Olympics in my home country. I’m so grateful for all the support people have given me here.

“I want to try to win the relay and hope to enjoy the other competitions at these Games.”