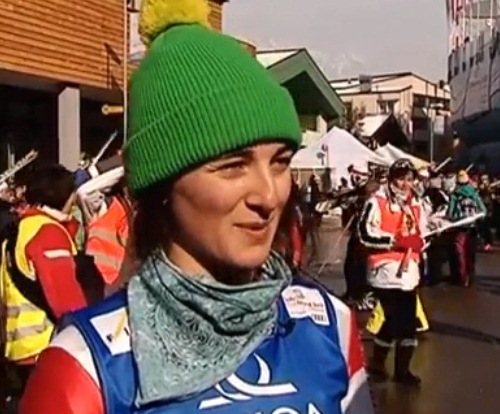 There will be a mixture of relief, elation and sadness for Georgian flagbearer Nino Tsiklauri at Sochi’s opening ceremony tonight, with memories of the tragic death of her compatriot Nodar Kumaritashvili at the 2010 Vancouver Olympics still fresh in the minds of many.

The last Winter Games will forever be linked to Kumaritashvili’s horrific accident on a luge training run just hours before the opening ceremony that left Tsiklauri and her fellow Georgians numb.

No one had any motivation, any wish to race after that incident. Everyone just wanted to go home. But we decided to stay there, in respect of the Olympic Games, but first of all for Nodar

“Almost everyone knows how difficult it was for us to race in Vancouver as we lost one of our huge athletes. No one had any motivation, any wish to race after that incident,” said the 20-year-old Tsiklauri, who is competing in her second games.

“Everyone just wanted to go home. But we decided to stay there, in respect of the Olympic Games, but first of all for Nodar.”

That Georgia are in Sochi at all is a welcome surprise for Tsiklauri after her country’s government abandoned the idea of a boycott late on.

Many Georgians remain bitter over the 2008 war with Russia, which left two separatist territories outside of Georgia’s control, including Abkhazia, just south of Sochi.

“I was training in Italy with my team – Kronplatz Racing Centre – and when I arrived home my mum just called me. I remember there were some moments of silence and then I asked her to repeat,” said Tsiklauri.

“I was shocked, could not believe it. Then I went on the internet and saw all the congratulations from my friends.

“I was thinking that one of my teammates could be the flagbearer as they are older than me and have more experience, but in the end I was the ‘lucky one’. So that was definitely a huge, unexpected surprise.”

Since 2008 political relations between the two countries have remained tense. with unresolved disputes over land and both sides accusing the other of war crimes.

Despite the simmering political tensions between Russia and Georgia, Tsiklauri wants Sochi to be about sport and not about differences or the security threat.

“They are the Olympic Games. I will never mind which country hosts them, I would look at them and think about them as the Olympic Games, as a sport competition, without any political thoughts in my brain.

“I have never been there (Sochi), just have seen the videos of slopes and they look amazing. I can’t wait to try them!

“For sure Russians will not allow anything to happen to the athletes or generally in Sochi, and they are getting extra help from many other countries, so it (security) should not be a problem.”

The Georgian skier, who has won three international races in her career and finished second at the British junior championships in 2012, is not a contestant for the medals just yet but she will certainly give her very best in her favourite event: the giant slalom.

“My biggest expectation for Sochi? I would say it the easy way, just to improve my results from Vancouver would be really positive for me. And I would really like to finish both disciplines this time.

“My season is going okay…I had some problem with my leg muscle but now, after a lot of physiotherapy, it is getting better. Because of it, I was not able to ski much giant slalom. It was super painful, but slalom was feeling fine, so I decided to train it more and I feel good improvements!”

With time on her side Tsiklauri’s goals do not end with these Olympics.

“I think just to be a good skier, be a World Cup skier, not just a FIS racer or something like that. I want to be more famous, I mean, like just to do World Cup and bring my country’s name outside.