Sochi 2014: Erik Lesser won the biathlon silver medal his grandfather so nearly did until a collision in 1976 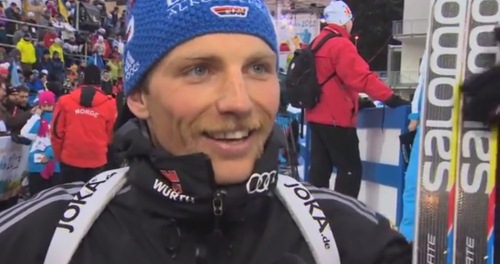 The 25-year-old was flawless in his shooting, hitting 20 targets out of 20, but he did not quite have the speed on the skis to eclipse world champion Martin Fourcade of France.

His grandfather Axel Lesser was part of the East Germany biathlon relay team in the 1976 Innsbruck Games which missed out on a medal when second-placed Axel collided with a spectator and was forced to abandon the race through a knee injury.

I was so close to stopping, but only girls do that. I am a man, I told myself that I can’t do that

Having finished 21st in the 10km sprint and 16th in the 12.5km pursuit, Erik admitted that he was not expecting to get amongst the podium places.

“I did not count on a medal at all,” he said. “I wanted to have a good race, that’s about all. When I heard Christopher Stephan [Germany] cheering on the last loop, I knew I was up to something amazing.

“I was pretty nervous [on the last shooting round]. The first two shots were okay but I felt my knees shaking after that. I was so close to stopping, but only girls do that. I am a man, I told myself that I can’t do that.”