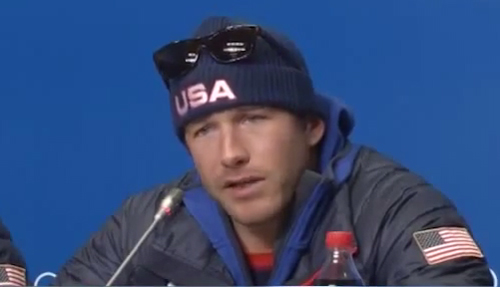 Lose your concentration in tomorrow’s blue riband event – the men’s alpine skiing downhill charge to the finishing post – and you could lose your life on a super fast course, warns five-times Olympic medallist Bode Miller.

This year’s competition is wide open with no one dominating the World Cup season but Norwegian Aksel Lund Svindal and veteran American Miller, the super combined champion from Vancouver 2010 where he also claimed bronze in the downhill, will both challenge for the title again.

Svindal has two World Cup wins out of six this season and is many people’s favourite but Miller looked impressive in Saturday’s training runs and, at 36, could be on course to become the oldest Olympic alpine medallist in history: if he can stay on his feet.

“I was going to go easier but seeing the first couple of guys crashing I decided not to do that,” said Miller.

“It is so damn fast and the snow is so hard that you don’t want to sacrifice edge pressure and grip on the snow for aerodynamics.

“If you are not totally focused this course can kill you. It is one of those courses where I don’t think you are safe going easy.”

Svindal and Miller both looked impressive over the brutal two-mile course but the Norwegian believes the speed his American opponent is showing makes him the current favourite for gold.

“He’s been the best skier on this mountain, so now he looks like the favourite,” said the 31-year-old.

“No matter what people are doing, pushing or not, just look at the split times. Bode is fast. That’s the bottom line.”

Other contenders for the crown include Italian Dominic Paris and Norwegian Klaus Kroell.

Paris won the downhill silver medal at the 2013 world championships behind Svindal and has been a consistent performer during the World Cup season.

Kroell, another veteran at 33, finished the 2012 season ranked number one in the world for downhill and has continued to perform well throughout the 2013 season.

The downhill is notoriously hard to call but one thing’s for sure – whoever makes the podium tomorrow will have to overcome a real test on the treacherous Rosa Khutor piste.