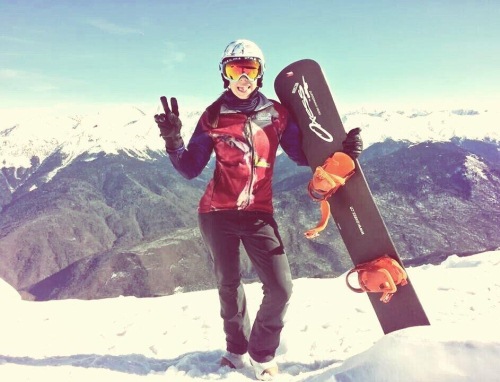 The Czech Republic’s Eva Samkova wore a ‘lucky’ moustache during her victorious run in the snowboard cross final at the Rosa Khutor Extreme Park.

The moustache was drawn on in her national colours and Samkova was dominant from start to finish in the competition setting the fastest time in the seeding runs before comfortably cruising her way to gold.

The 20-year-old becomes her country’s first Olympic champion in a snowboard event as favourite Lindsey Jacobellis again crashed out, falling in her semi-final.

The woman who won silver at the X Games earlier this year said that the advice of her coach had helped to keep her out of trouble.

“My coach told me that will be best thing I can do, just be in front of them,” she said.

“I just listen to my coach, I just want to be the best and get the maximum from my movement. It’s just physics, that’s all.”

There were two serious crashes in the early rounds of the competition with Norway’s Helene Olafsen unable to finish her run and therefore unable to improve upon her fourth place finish that she recorded in Vancouver.

Meanwhile American Jacqueline Hernandez suffered a concussion in an ugly fall and was taken from the course on a stretcher.

Britain’s Zoe Gillings, who missed out on a spot in the final after a photo finish in the semi-final, thought there could have been more accidents during the competition.

“I’m surprised that 24 girls made it through to the racing today because we had some really big falls in training this week,” she said.

“It is a big course, but I wouldn’t have expected anything less and it was fun to race on.”