Sochi 2014: Top athletes and disciplines to watch on bumper Sunday of action at the Winter Olympics 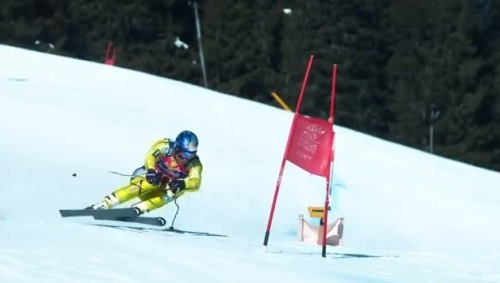 With eight gold medals at stake on Sunday, the second day of Sochi 2014 is the tournament’s busiest, as athletes battle it out to walk away with the sport’s most prestigious accolade.

The day’s biggest attraction is the men’s alpine skiing downhill, one of the most popular events in the Winter Olympics’ diary.

Svindal stars in a Youtube video, Blink of an Eye, that credits his comeback from his 2007 Beaver Creek crash, praising his focus that dictates that he doesn’t even blink during a two minute run.

In 2010’s Games Svindal came runner-up to Didier Defago, while Miller finished third, so the outspoken American will be looking to assert his dominance on the sport this time around.

There has been extensive media coverage of his thoughts on the Rosa Khutor Alpine Resort course, deeming it “damn fast”.

Having completed the fastest runs in two of three official training runs he added, “It is a fucking real course. You can see the glare ice reflection in the middle section, but I just said, ‘fucking bring it!’”

Sunday also sees the first ever figure skating team event, for the ice dance free contest which kicks off at 17:10 GMT.

Simon Ammann is seeking to become the first ever ski jumper to win five gold medals when he defends his title in the men’s individual normal hill.

Ammann won gold in the normal and large hill events for the past two Winter games, and his biggest rivals will be Austrian Gregor Schlierenzauer and Pole Kamil Stoch.

Another closely contested medal event will come in the ladies 3000m speed skating event at 11.30 GMT. Dutch teenager Irene Wust will be looking to increase her staying power from a gold medal win over 1500m during Vancouver 2010, when taking on Czech rival Martina Sablikova.

Endurance specialist Sablikova was victorious in both the 5000m and 3000m and is red hot favourite to defend her title and add a fourth career Olympic medal to her tally.

The inaugural outing of the women’s snowboard slopestyle sees North American rivals Spencer O’Brien of Canada and American Jamie Anderson battle it out for their first ever Olympic medals.

Finally the luge comes to a head in the afternoon, but the bookies certainly don’t fancy German Felix Loch relinquishing his title, as they have him priced at 1-6 to preserve his gold medallist status.