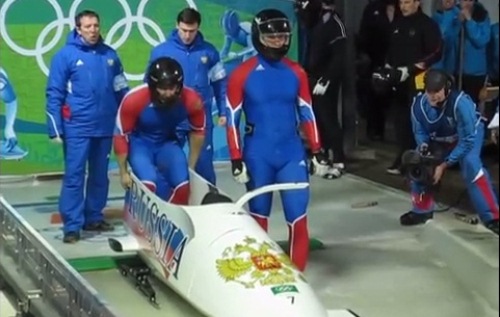 Russia slid to gold in the two-man bobsleigh as Belarusian Darya Domracheva became the first women to win three gold medals in biathlon at one Winter Olympics on day ten in Sochi.

At the Sanki Sliding Centre Russia’s Alexander Zubkov and Alexey Voevoda were fastest in the two-man bobsleigh event to the great delight of the gathered crowd.

The pair, who do not get on, become the first ever athletes to win gold in Olympic bobsleigh events for Russia.

Zubkov carried the flag during the opening ceremony and he said this victory puts to bed the Russian belief that the flag bearer never wins a medal.

“This is a dream come true. We did it together. This victory is a victory for the whole country. The fight with yourself provides the maximum results,” Voevoda said.

Domracheva carved out her own piece of history by winning the women’s 12.5k mass start.

The 27-year-old becomes the first women to win three biathlon gold medals in one Olympic games as well as the most decorated Belarusian athlete across both summer and winter games.

After her victorious performances in the women’s pursuit and individual events last week Domracheva has been appointed a ‘Hero of Belarus’ by Belarusian president, Alexander Lukashenko.

“Of course I am really happy about that title. It sounds overwhelming,” she said.

“It’s hard to believe I am a three-time Olympic champion and it is even harder to believe that I am a ‘Hero of Belarus’.”

There was further success for the northern European nation as Anton Kushnir won the men’s aerials making it a clean sweep for Belarus as Alla Tsuper took the women’s title on Friday.

Before the games Belarus had only won one gold medal at a Winter Olympics but Kushnir’s victory means that they now have five gold medals at this games alone.

17 years of hard work was justified. To come away with a gold medal is amazing

Fog interrupted proceedings with both the men’s 15k biathlon, which had already be delayed from Sunday, and snowboard cross was also postponed and rescheduled for Tuesday.

Meanwhile the American couple of Meryl Davis and Charlie White put in a superb performance to claim the gold in the Ice Dance at the Iceberg Skating Palace.

Dancing to ‘Scheherazade’ the pair set a new points record, scoring 195.52, and become the first duo from the USA to be crowned Olympic champions in the event.

“The crowd was really alive out there today for all the teams and we fed off the energy. We were well prepared by our coach Marina Zueva in coming here and doing our job,” White said.

“I felt like we had done everything we could from the beginning of this competition, in practice, team event, this event. And 17 years of hard work was justified. To come away with a gold medal is amazing.”

Austria continued their disappointing form in the ski jumping finishing in second place with Japan securing a bronze medal.

The United States women’s ice hockey team beat Sweden 6-1 in their semi-final to set up an all North American affair in the final against Canada who beat Switzerland 3-1.

Germany sit atop the medal table with a total haul of 12 with seven gold, three silver and two bronze.

Russia and the Netherlands both have a total of 17 medals but the hosts sit above the Dutch due to two more silver medals.