Sochi 2014: Russian fairytale for Hoefl-Riesch as Dutch dominate on ice 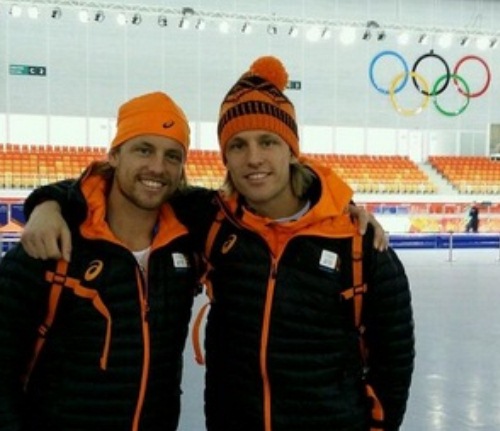 Dymanic Dutch duo and twins Michel and Ronald Mulder showed the speed skating world a clean pair of heels to lead their country’s domination on ice on day three as Germany’s Maria Hoefl-Riesch confirmed her status as the most successful complete skier of her generation by retaining her super combined title.

The Mulders became only the second pair of twins to appear on the same individual podium at a Winter Games event, after USA’s Phil and Steven Mahre who medalled in the slalom at the 1984 Games in Sarajevo.

Michel beat teammate Jan Smeekens by 0.01 seconds to take the gold, with Ronald holding off the challenge of 2010 Olympic champion Mo Tae Bum of South Korea to seal the bronze.

This feels like a fairytale… this is really overwhelming

Surprisingly, it marked the first Dutch success in the 500m event since Jan Ykema won silver at the 1988 Games in Calgary.

“If your twin brother becomes Olympic champion and you win bronze yourself, you have to be satisfied,” said Ronald Mulder.

It signals Hoefl-Riesch’s third Olympic gold as she becomes the first flagbearer from the opening ceremony to win gold in Sochi.

“This feels like a fairytale,” she said. “My confidence was a bit knocked before I went down, especially because the downhill didn’t go great this morning. This is really overwhelming.”

Meanwhile, Norwegian biathlete Ole Einar Bjoerndalen was denied the opportunity to become the most decorated Winter Olympian of all-time as he finished an agonising fourth place in the 12.5km pursuit.

His success means that a Frenchman has now secured gold in the pursuit at the last four Olympic Winter Games.

Fourcade waved his arms and blew a kiss to the crowd as he enjoyed a flawless five shots in the final round despite still needing to ski 2.5km to the finish line.

The 25-year-old finished a staggering 14.1 seconds ahead of his nearest rival, Ondrej Moravec of Czech Republic while Fourcade’s teammate Jean Guillaume Beatrix fought off Bjoerndalen’s late surge to finish in the final medal position.

“On the skis I was like a boxer, it was a good fight,” Fourcade said. “I felt confident, I felt unbeatable.”

Canada’s Charles Hamelin added a third gold medal to his collection with a convincing win in the short track 1500m final.

On the skis I was like a boxer, it was a good fight. I felt unbeatable

China’s 17-year-old sensation Han Tianyu was a surprise silver medallist, with Russia’s Victor An taking the final spot on the podium.

An becomes the second Winter Olympian to win medals for two different countries not linked in any way after he won triple gold for South Korea as Ahn Huyn-Soo at Turin 2006.

The final gold medal of the day went to Canada’s Alex Bilodeau as he became the first multiple Olympic champion in freestyle skiing when he won the moguls.

The 26-year-old retained his Olympic title with a stunning score of 26.31 in his final jump but will retire from the event after the Games.

International compatriot Mikael Kingsbury had been touted as his closest rival but the 21-year-old stumbled in the latter stages of the run, forcing him to settle for silver and Canada’s seventh medal of the Games.

Russia’s Alexandr Smyshlyaev prevented Canada from a clean sweep however as he was inspired by the vocal home support to edge out Marc-Antonie Gagnon for the bronze.

Neverthless the medals elevated Canada to first place in the medal table with three golds, three silvers and a bronze to the Netherlands’ same overall tally of seven with one fewer silver and Norway’s seven with two golds.