Sochi 2014: Germany powered to top of medal table as alpine skiing history made after first shared gold in women's downhill 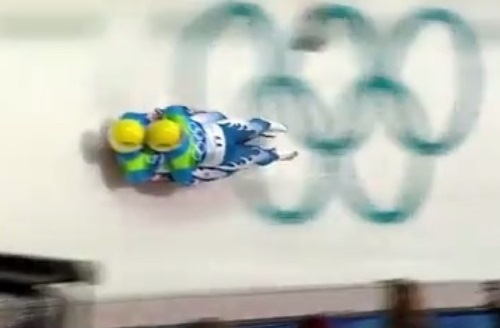 Blink and you miss it: Hectic day five Photo: Olympics/YouTube

Russia’s figure skaters left viewers awestruck as the hosts boosted their tally with a gold and silver late on Wednesday after Germany’s luge dominance put the Europeans top of the medal chart and gold was shared in a thrilling women’s downhill skiing finale.

Tatiana Volosozhar and Maxim Trankov underlined their pairs figure skating dominance as they beat compatriots Ksenia Stolbova and Fedor Klimov by a whopping 28 points while Germans Aliona Savchenko and Robin Szolkowy took bronze despite two mistakes in their free run.

It was Russia’s second gold in the figure skating and second overall having won the team event earlier in the week.

It’s incredible in our sport how small the distances are. I think that’s the challenge of our sport – the hundredths count

All Russian eyes will turn to the ice hockey tomorrow, as poster boy Alexander Ovechkin and his teammates take to the ice in their first match against Slovenia.

Slovenian Tina Maze secured her country’s first Winter Olympic gold early in the day after matching Swiss Dominique Gisin’s mark in one of the fortnight’s most-anticipated events and it did not disappoint, providing spectators with the first ever tie for gold in Games skiing history.

With ski timing only going to hundredths of a second, Maze and Gisin’s times of 1.41.57 could not be separated, so Olympic organisers had to find another gold to award. With no silver on offer, Gisin’s fellow Swiss Lara Gut won bronze.

“It’s incredible in our sport how small the distances are,” Maze said.

“I think that’s the challenge of our sport – the hundredths count.

In the men’s double luge competition, Germans Tobias Wendl and Tobias Arlt took gold from the Linger brothers, Andreas and Wolfgang from Austria, storming to a massive win by over half a second.

Latvian brothers Juris and Andris Sics put in the third fastest time over both runs to win the bronze medal, the Baltic nation’s first of the Games.

And in the men’s nordic combined normal hill competition Eric Frenzel of Germany beat Japan’s Akito Watabe and Norway’s Magnus Krog to help put his country on six golds by the day’s end, good enough for first place ahead of Canada, the Netherlands and Norway all on four gold medals.

Elsewhere, Stefan Groothuis put the Dutch on four golds at the speed skating track by winning the men’s 1000m at the Adler Arena.

Groothuis’ medal was his country’s tenth overall in the sport and his win was somewhat of an upset, with overwhelming favourite Shani Davis (USA) finishing a disappointing eighth in his quest to win the event in three consecutive Olympics.

In the Rosa Khutor Extreme Park there were more fine margins to be seen as American Kaitlyn Farrington won the women’s snowboard halfpipe competition with a second run of 91.75 to make up for Shaun White’s failure to live up to his favourite tag in the men’s event 24 hours earlier.

Farrington beat Australian Torah Bright by just 0.25 points who threw down a McTwist in her final run to score 91.50 from the judges, while American Kelly Clark came third with 90.75 from her second run, pipping Hannah Teter to the bronze by a quarter of a point.

Canada continued their 100 per cent start to the women’s ice hockey campaign, beating their US neighbours 3-2 in a tight finish.

The US scored with 65 seconds left on the clock, having pulled their goalkeeper several seconds earlier, but even with a 6-4 power play advantage they could not score the levelling goal.

Sweden got the men’s competition underway when the 2006 champions beat Turin’s bronze medallists the Czech Republic 4-2 as Switzerland beat Latvia 1-0 in the day’s other match.