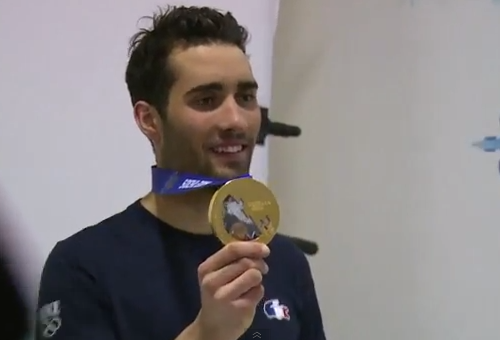 Frenchman Martin Fourcade doubled his medal tally on day six as Germany completed a sweep of the luge events in Sochi and Russian skating legend Evgeni Plushenko called time on his career.

Fourcade claimed his second gold of the games in the men’s 20k biathlon and is the first French athlete to win multiple gold at a Winter Olympics since Jean-Claude Killy won three golds in alpine skiing in 1968.

Fourcade, who has already won the 12.5km event, has the chance to surpass Killy with the 15km mass start and the 4x.5km races still to come.

This is not how I wanted to end my career. I am very disappointed. But I tried to do my best

“Of course I want to continue. I have been fighting for theses victories for four years,” the 25-year-old said.

Elsewhere at the Laura Cross-Country Ski and Biathlon Centre Justyna Kowalczyk won the women’s cross-country 10k classic to become the most successful Polish Winter Olympian of all time.

The 31-year-old took her fifth medal to surpass ski jumper Adam Malysz despite suffering a fractured foot before the games had even begun.

“It’s taken a lot of years of hard work and this is the fourth gold in the history of Poland, so I think that is something big,” she said.

At the Iceberg Skating Palace Russian figure skating legend Plushenko withdrew from the men’s competition after suffering a back injury during the warm up.

It brings an end to the career of the two-time Olympic and three-time world champion, who helped Russia win the first gold of the games in front of President Vladimir Putin.

“I am sorry for my fans and for everybody, but I tried till the end. I almost cried. It’s hard, believe me,” he said.

“This is not how I wanted to end my career. I am very disappointed. But I tried to do my best.”

With victory in the inaugural team luge competition Germany sealed their complete domination of the sliding event in Sochi.

The team was made up of the men’s, women’s and doubles luge champions and the ‘Bayern Express’ finished over a second ahead of the rest of the field.

It is the second time in history that the Germans have swept the event.

There was drama in the women’s 500m short track final with three skaters crashing leaving the way clear for China’s Li Jianrou to take her country’s first gold at the games.

Elise Christie was deemed to have caused the crash on the first lap and so despite crossing the line second was penalised and moved back into fourth place, with Arianna Fontana taking second and Seung-Hi Park third.

My father supported me since I was young and never said no to me. I can’t thank him more for everything that he did for me. I miss him and I hope he is proud

“I’m so happy. I thought about medals but not a gold. The important thing was to trust myself,” she said.

“I didn’t care what time I went on ice. I’m competing with myself. I was very nervous as I was waiting and I don’t think anybody could have understood how I felt waiting.”

America claimed all three places on the podium in the men’s inaugural slopestyle skiing final with Joss Christensen, Gus Kenworthy and Nicholas Goepper beating out the competition.

It was only the third time that the United States has swept the podium at a winter games and it was an emotional victory for Christensen who lost his father in August last year.

“My father supported me since I was young and never said no to me. I can’t thank him more for everything that he did for me. I miss him and I hope he is proud,” Christensen said after his victory.

Germany lead the way in the medal table with seven golds, two silver and one bronze medals while Canada sit second on the same total number of medals.

The North American nation have four gold and silver medals and two bronze.