Sochi 2014: Having won eight medals on the track so far, why are the Netherlands so good at speed skating? 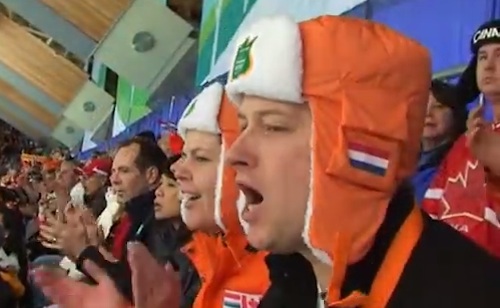 If you were to be told that one country has won two clean sweeps of medals in Sochi so far, you might take a guess at it being Norway in the cross-country, or the USA in the snowboarding.

If you did, I would say that you’re wrong and point you towards the Adler Arena where the Netherlands have been dominant in the speed skating thus far, winning eight medals (they haven’t recorded a podium finish yet in any other event) with three of them gold.

The Dutch men have cleaned up in both the 500m and 3000m so far, and the eleven men in their squad still have fourteen more opportunities for medals.

We grew up with speed skating. Every little kid in the Netherlands does it

The women have added another gold through Ireen Wüst in the 3000m and boast a nine-strong team.

That makes 20 speed skaters in a 41-strong Dutch Olympic team, but why do they love the sport so much? It’s not as if speed skating is the most exhilarating sport. Competitors do not so much race against each other, but against the clock.

Two skaters are on the track at any one time but their performance against each other is quite irrelevant, all eyes in the arena are on the clock.

This prompted one commentator from Time magazine to describe the sport as ranking ‘somewhere between watching a stroll in the park and white noise’ as a spectator sport.

But here’s a video where Dutch fans describe their love for the sport.

There are no mountains to ski on in the Netherlands, but vast areas of the country are situated below sea level, meaning there are plenty of bodies of water which can freeze over in the cold Dutch winters.

As such, skating became not only a popular past-time in the Netherlands – starting over 1,000 years ago – but a very good way of getting from A to B. Children there learn to skate at the same time as learning to walk.

The Dutch like to wax lyrical about the style and the grace required to be a speed skater, not only the ability to glide at 35mph, qualities epitomised by the Mulder twins, Michel and Ronald, who won gold and bronze in the 500m on Monday.

Michel may have come into the world ten minutes after Ronald, but he crossed the line 0.13 seconds ahead of his twin, and more importantly 0.01 seconds in front of Johannes Smeekens to claim gold.

“We grew up with speed skating,” Michel Mulder said.

“Every little kid in the Netherlands does it.

“The level of competition is very high in Holland and that helps us a lot, but we knew that the Dutch had not a medal in the 500m since 1988.

“This is our first 500m gold so we all knew this was a historic one.”

Their achievements on the ice have moved the Netherlands into fourth place in the medal table and it’s not over yet: there are still seven more events for the men and women in orange to win gold.