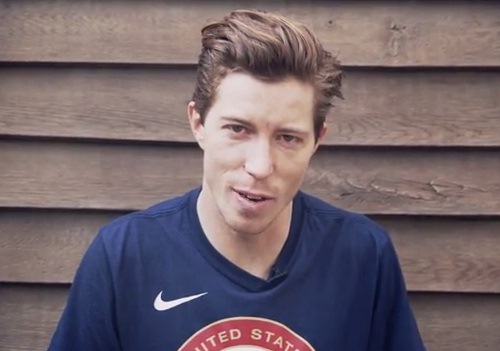 It may not have been Shaun White’s finest day on the slopes but he certainly made it one to remember for two young cancer patients.

The signs had looked good for the 27-year-old after he amassed a stunning 95.75 score to qualify in first place for the final, before jumping the barriers and celebrating with them.

However, he failed to replicate that performance in the final – dropping a trick for the first time in an Olympic event when he missed the grab in his switch double 1440 on his first run and then narrowly missing out on the bronze position with his 90.25 second run.

I hate the fact that I nailed it in practice, but it happens. It’s hard to be consistent

“Shaun came over and just gave me a high-five,” said 10-year-old Ben Hughes, a snowboarder from St Louis, USA, who had been diagnosed with a severe form of leukaemia four years ago.

“I thought, ‘He’s here? What?’ He’s really nice and a really great snowboarder.”

Ben is in remission and saw his dream to attend the Sochi games fulfilled by the Make-a-Wish Foundation.

With him was 19-year-old cancer survivor Kaitlyn Lyle who was also flown to Russia courtesy of the foundation.

“I had no idea he’d do this,” she said. “I was diagnosed about four-and-a-half years ago with bone cancer and so, at the time of the last Olympics in Vancouver, I got to make my wish – around the same time that Shaun White won gold.”

“I’ve always been a fan of the Winter Olympics. I was torn between seeing the skating as I used to be a figure skater and these were the Olympics I was trying to get to as a kid. But when I saw Shaun win gold, I chose snowboarding.”

Unfortunately the pair did not witness their idol make history by becoming the first snowboarder to win three gold medals in an individual event as Switzerland’s Iouri Podladtchikov finally overcame his rival.

Having long found himself in White’s shadow “Ipod” wowed the judges by pulling off his innovative Yolo Flip (two flips while spinning four revolutions) to earn a score of 94.75.

Ayumu Hirano had not even been born when snowboarding was introduced at the 1998 Nagano Games but the 15-year-old produced a precocious display to earn the silver medal, with fellow Japanese teammate Taku Hiraoka edging out White for the bronze.

White was clearly crestfallen by his failure to live up to his favourites tag, especially considering his promising performance in qualifying.

“I am disappointed,” he said. “I hate the fact that I nailed it in practice, but it happens. It’s hard to be consistent.”