Sochi 2014: Russia finally hit top spot in the charts with their 11th gold thanks to Anton Shipulin and co in a frantic men's biathlon relay 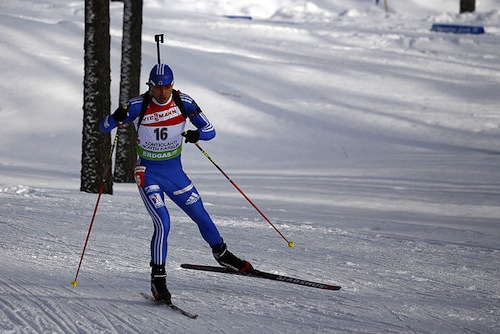 Anton Shipulin spearheaded a Russian victory in the final biathlon event of the Games – the men’s 4×7.5km relay- as Norwegian Emil Hegle Svendsen had a meltdown in the range on the final shoot to throw away their medal chance.

Shipulin battled out the final lap with German Simon Schempp after Svendsen’s nightmare with the Russian taking the win by just three seconds.

One week ago Shipulin missed out on his first podium place by less than a second after missing his final shot in the standing shots after hitting the range in first place, gifting Norway’s Ole Einar Bjoerndalen the gold.

“I tried to do my best and the German team have given us a present,” said Shipulin, delighted to have joined his sister Anastasiya Kuzmina in the winners’ enclosure after her gold in the sprint event for Slovakia.

“I want to thank them and to thank my team as well because everyone did their best in the team.

“Svendsen is a great champion but he could not control his nerves.”

Bjoerndalen himself missed the chance to break Bjoern Daehlie’s record of eight Winter Olympics gold medals, despite having handed over to Svendsen on the final leg with a healthy lead over Germany.

“It’s a disappointment for sure but I was not so well this morning, I was empty,” said Bjoerndalen at his sixth and final Olympics.

Svendsen then missed one shot in his prone attempts, but it all went wrong from here. The Norwegian as he left one of the targets standing and was forced to undertake a penalty lap, eliminating any chance of a medal.

Shipulin and Schempp both shot clean and sped off into the final lap with the Russian holding off a late surge from the German on the final corner to take the win by three seconds in front of a roaring home crowd at the Laura Cross-country and Biathlon Centre.

Alexey Volkov, Yevgeny Ustyugov and Dmitry Malyshko set up the victory with three solid legs ahead of Shipulin’s final sprint, while the German team, consisting of Erik Lesser, Daniel Boehm, Arnd Peiffer and Schempp, only missed two shots on their entire run.

The win moves Russia to the top of the medal table, with the hosts having now won gold in ten of the 15 events in the Games, and sealed their best ever Winter Games medal tally.