Sochi 2014: Austrian brothers Matthias and Florian Iberer set aside the usual bickering to team up for national ice hockey side 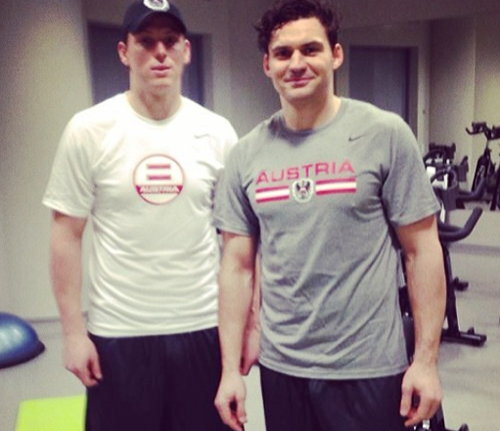 Brothers Florian and Matthias Iberer are used to facing each other in the Austrian National Hockey League but that rivalry will be put on ice when they line up against Finland on Thursday.

The Austrians come from a hockey mad family with their younger brother Martin recently retiring from the sport and their sister Anna representing Austria at the 2012 Youth Olympics in Innsbruck.

“It’s more fun sometimes to play against him, but it’s also fun if you’re on the same team and you can hang out with him everyday, play together and win together,” Matthias said, ahead of the men’s competition which will start wowing Russian crowds on Wednesday when Latvia clash with Switzerland and the Czech Republic battle Sweden.

They put us in a room together and we didn’t complain. It’s nice because we don’t see each other that much

“Our father is a doctor and wanted to get us into that profession more, but we decided we want to be hockey players. He said we can do whatever we want and we wanted to play hockey.”

After years living away from home the brothers have found themselves roommates once again after being allocated the same room in the athlete’s village.

“We couldn’t choose,” joked Matthias. “They put us in a room together and we didn’t complain. It’s nice because we don’t see each other that much.”

Younger brother Martin, who played in goal, will be watching from the sidelines and Matthias regrets that they couldn’t all take to the ice together.

“It would have been nice to have the third one here, too, but that’s how it is,” Matthias said. “We have two here and we’re happy.”