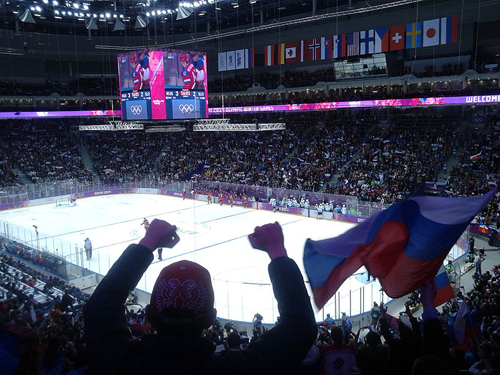 Tina Maze says she was inspired to Olympic gold in the giant slalom after watching her compatriots sweep into the ice hockey quarter-finals against all the odds.

The men’s team beat Austria 4-0 to cap a fantastic day for the tiny country which can only boast seven ice rinks and 148 registered senior male players.

“I was watching hockey between the runs,” Maze said. “The guys were playing so well. They just gave me a will to show so much more.”

It is, for sure, the biggest thing we have ever done in the history of Slovenian hockey

Slovenian star Anze Kopitar, who plays in the NHL for the Los Angeles Kings, scored the first goal and led the celebrations on the buzzer embracing head coach and father Matjaz Kopitar.

Sabahudin Kavacevic, who scored the third, now believes his team can go even further and is starting to think the unthinkable.

“We would have been happy with one point before the end of the tournament, but right now we’re going for the gold medal,” said the 27-year-old.

Forward Ziga Jeglic added: “It is, for sure, the biggest thing we have ever done in the history of Slovenian hockey.

“To win against Austria, like our biggest rivals, is also a big thing for us. It was a great game and a great day for us.”

Jan Urbas and Jan Mursak completed the scoring for Slovenia who now face Sweden in the last eight at the Bolshoy Ice Dome on Wednesday.