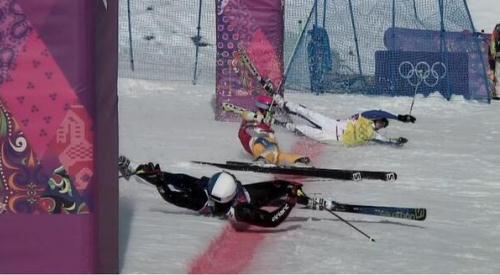 There have been some pretty pointless photo finishes in the Winter Olympics so far, most notably in the snowboard cross with photos being used when athletes have clearly won by a board length.

But one of Thursday’s ski cross quarter-finals produced perhaps the best photo finish of all time.

With the top two progressing to the semi-finals, Sweden’s Victor Oehling Norberg looked set to go through along with Russia’s Egor Korotkov.

Norberg, Korotkov and Finland’s Jouni Pellinen all crashed meaning that Switzerland’s Armin Niederer moved up from third to first to be the only one to go through on his skis.

The three fallers meanwhile all crossed the line at the same time, each trying desperately to do whatever it took to ensure they were slightly ahead.

Ultimately the judges awarded second place to Korotkov, who had taken up a superman position to stretch across the line.

Here we take a look at some other notable photo finishes.

As Emil Hegle Svendsen approached the finish line of the 15km mass start on Tuesday he raised his arms in celebration.

The Norwegian had broken clear of Martin Fourcade with 150m to go, a move he believed had secured his third Olympic gold.

But Fourcade finished the strongest and as Svendsen raised his arms, the Frenchman lunged for the line.

Svendsen survived by a matter of inches and was left relieved that celebrating at 14.999km instead of 15 had not come back to haunt him.

Nicola Spirig edges out Lisa Norden at the London 2012 triathlon

After almost two hours of swimming, cycling and running, it took a photo to determine whether Nicola Spirig or Lisa Norden would take home Olympic gold.

A sprint for the line saw them both record a time of 1:59:48, reportedly a million-to-one chance for the unprecedented photo-finish.

The gold was awarded to Spirig with the judges ruling that the Swiss athlete’s torso was ahead of the Swede’s. The winning margin was less than 15cm.

The eighth stage of the 2005 Tour de France was won by the narrowest of margins.

The 231.5km stage from Pforzheim to Gerardmer came down to a sprint to the line between Pieter Weening and Andreas Kloeden.

And as they crossed at the same time, a photo was called for with Kloeden left wishing he had added a little bit more air to his tyres as 24-year-old Weening claimed his first professional win.

The official timer which has sensors on each bike revealed he Dutch cyclist had won by 0.0002 seconds.

Neptune Collonges wins by a nose

The 2012 Grand National saw one of the most dramatic finishes of the race’s history as Neptune Collonges came from what appeared an impossible position to edge out Sunnyhillboy.

As they rounded the Elbow, Sunnyhillboy had a clear lead and looked assured of victory.

But with 150 yards to go, 33-1 shot Neptune Collonges ridden by Daryl Jacob made their move to pip it by a nose.