Sochi 2014: Ante Kostelic helping put talented son Ivica in the running for a super-combined medal after setting the course 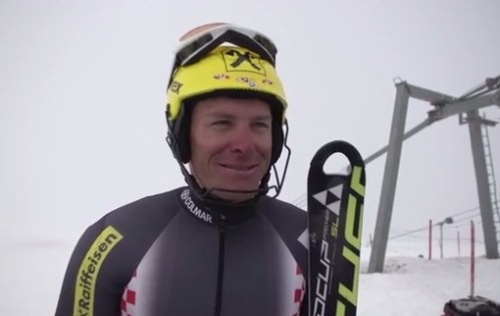 With Croatian Ivica Kostelic in contention for a medal in the men’s super-combined tomorrow you might be surprised to learn his father, Ante, has set the course.

The country’s national coach was selected at random as is the norm and in Vancouver, when his son took silver in the event, Ante had set the course for the slalom element.

It is accepted in the sport that the best skier can win on any course but one of the favourites, Ted Ligety, is unsure of what to make of the coincidence.

My personal goal is to win a medal. I think I have the best chance in [super] combined

“Ante always sets difficult courses. It is what it is. I don’t know if Ante normally sets for Ivica or not – he just normally sets on his own kind of whim,” the American said.

“Slalom is always difficult no matter what.”

Meanwhile Ivica said that although it may have given him an advantage in 2010 he couldn’t see any real benefit this time round.

“I must say that we trained some of these combinations that my dad set today but I don’t think it was a big advantage because nobody really had a problem there, well at least most of the guys,” the 34-year-old said.

“We have been training on his courses for many, many years, but he’s always setting different courses and there is always something tricky.

“It is never easy because he thinks that skiing is a challenge and the course must be really tricky and tough.”

Kostelic and American Bode Miller both have the opportunity to make history and become the first men to win three Olympic medals in the combined and super combined events.

And Ivica, who claimed the silver in this event in Torino, likes his chances.

“I have goals; my personal goal is to win a medal. I think I have the best chance in [super] combined,” he said.

In the build-up to the race Miller has admitted that he postponed having eye surgery earlier in the year but he has now come to regret the decision.

The 36-year-old, who won gold in 2010 and silver in Salt Lake City, said that his skiing is fine in bright light but when the weather isn’t perfect his own particular style of descending is hampered.