Sochi 2014: Russia's first Winter Olympics produced many stunning moments and here's a top 10 to round off a memorable fortnight 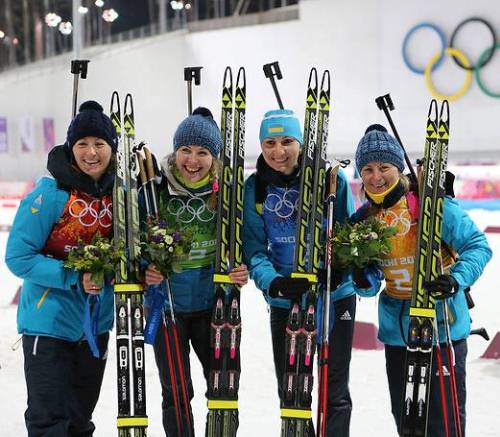 After 16 days of competition, it’s time to look at the top ten moments of the most expensive Olympics in history.

It could be the greatest photo finish of all time.

The craziness of ski cross was evident in all its glory in the men’s quarter-final when three of the four riders crashed on the final jump.

With the top two progressing to the semi-finals, Sweden’s Victor Oehling Norberg, Russia’s Igor Korotkov and Finland’s Jouni Pellien, in first, second and fourth respectively, all failed to land cleanly.

This meant that Switzerland’s Armin Niederer jumped from third to first to be the only one to go through on his skis.

The three fallers meanwhile all crossed the line at the same time with each trying desperately to be slightly ahead of the others.

And it was Korotkov who prevailed, taking up a superman position to stretch across the line.

Is this the greatest photo finish ever? The action has been fast and crazy in the #SkiCross this morning. pic.twitter.com/hUDzw2z53t

It was the gold medal every Russian wanted. Star player Alexander Ovechkin said it would justify the $50bn Russia spent on the Winter Olympics.

But losing to Finland 3-1 in the quarter-finals ended Russia’s dream of men’s ice-hockey gold, meaning coach Zinetula Bilyaletdinov had to face the music of the Russian press.

After answering questions about the result and what had gone, the press conference rounded off with this remarkable exchange.

Journalist: “What future, if any, do you see for your own work and for your coaching staff? Because, you know, your predecessor was eaten alive after the Olympics.”

Bilyaletdinov: “Eat me and I won’t be here anymore.”

Journalist: “But we have the world championships coming up!”

Bilyaletdinov: “Well then, there will be a different coach because I won’t exist anymore, since you will have eaten me.”

Journalist: “But you’re staying aren’t you?”

Bilyaletdinov: “Yes, I will remain living.”

As things stand, it appears that Bilyaletdinov is indeed still alive.

Trailing 5-4 in the final end of an eliminating tiebreaker against Norway, Team GB skip David Murdoch had a decision to make.

His Norwegian counterpart Thomas Ulsrud’s mistake meant with the final stone he could either play it safe for one – and force an extra end but hand Norway the hammer – or go for the win with an all-or-nothing shot.

He looked at his coach Soren Gran and smiled: there was only one option in his mind.

The Scot judged it to perfection, promoting one of his stones to knock out the two Norwegian stones lying one and two to secure Britain a double and a place in the semi-finals.

“You really have to seize the moment,” Murdoch said. “It’s a chance to win the game and we’re not scared of going for a big shot to win. It’s one of the best shots I’ve ever played.”

Netherlands coach Jillert Anema was invited onto CNBC on day 13 to discuss his country’s 21 medals in long-track and the USA’s failure to win any. When the American presenters started to insult the sport, he pulled no punches with his replies.

“You stay inside your own country, make your own game like American football, do it on your own and think you’re the best in the world. No way.

“When you come to the Olympics every four years you want to fight the rest of the world and you know your place. You won zero medals, zero!

“[If] you are not interested in becoming the best in the world, well, stay in your country, do your own sport and don’t compete with the rest of the world but don’t ask the question why you didn’t win any medals.”

6) Oshie the penalty king as USA edge out Russia

It was the most anticipated group match of the ice hockey Olympic programme. In a gripping revival of the rivalry that emerged 34 years ago with the USA’s ‘miracle on ice’, TJ Oshie scored the winning penalty as Russia were left to rue a controversially disallowed goal in normal time.

The game was played at breath-taking speed and after a goalless opening period, Pavel Datsyuk put the host nation ahead.

Cam Fowler and Joe Pavelski put the USA 2-1 ahead but Datsyuk equalised before Russia saw a goal disallowed in the closing stages as the net was slightly off its mooring.

The game went to penalties and while Datsyuk missed two of his three attempts, Oshie scored four of his six attempts, and the decisive goal in the eighth round of penalties, to snatch victory.

Oshie’s heroics saw him become a house-hold name in the States, gaining 130,000 followers on Twitter in the hours after the game.

All 4 of T.J. Oshie's goals in Shootout vs Russia https://t.co/vLWUsgYS6d

Before the start of the inaugural women’s ski half-pipe there was a moving tribute to the woman who had played a key role in the event being accepted into the Games.

Sarah Burke, who won four X Games golds and a world championship gold, had campaigned tirelessly for the event to be included and the International Olympic Committee (IOC) announced in 2011 that half-pipe and slopestyle would make their Games debut in Sochi.

Sadly Burke would never have the chance to compete on the highest stage. She died in January 2012 aged 29 following a crash in training.

While the IOC prevented competitors from wearing stickers on their helmets to remember Burke, they allowed a touching tribute which saw Sochi volunteers ski down the half-pipe in a heart shaped formation in memory of Burke and her impact on the sport.

By winning his 12th and 13th medals in Sochi, biathlete Ole Einar Bjoerndalen became the most decorated Winter Olympian.

The 40-year-old Norwegian equalled his compatriot Bjorn Daehlie’s record of 12 medals, won between 1992 and 1998 in cross-country skiing, when he won the 10km individual sprint.

And he made history when his Norwegian team won the mixed relay on day 12. The gold medal was Bjoerndalen’s eighth which meant he drew level with Daehlie at the top of the all-time gold medal list.

Bjoerndalen narrowly missed out on a 14th medal when Norway came fourth in the men’s 4×7.5km relay.

With just over three minutes remaining of the women’s ice-hockey final, the gold medal looked to be heading to the USA.

Goals from captain Meghan Duggan and Alex Carpenter had given them a commanding 2-0 lead and Canada looked set for their first defeat at the Olympics in 16 years.

But Brianne Jenner pulled one back with 3:26 left on the clock in the final period, her shot deflecting past goalkeeper Jessie Vetter.

Canada withdrew their keeper in favour of an extra attacker and the USA almost wrapped up the game, hitting the post from their end of the ice.

And with 54 seconds remaining, Marie-Philip Poulin levelled things up before scoring the decisive golden goal with just under 12 minutes remaining in overtime to spark wild celebrations as Canada secured their fourth consecutive Olympic title.

Russia may have missed out on competing for the final gold medal of the games, but they still had a golden finish on the final day, securing four medals.

This included a 1-2-3 finish in the men’s cross-country skiing 50km mass start which gave the host nation their first ever clean sweep at the Winter Olympics.

In a dramatic finish, with the top four being separated by just a second after one hour 46 minutes of racing, Alexander Legkov edged out compatriots Maxim Vylegzhanin and Ilia Chernousov to claim gold.

“This is priceless. It’s more valuable than my life, I can’t express how I feel,” said Legkov.

The result ensured Russia would top the overall medal table for the second time ever. Gold in the four-man bobsleigh shortly after meant the hosts finished with 13 golds and 33 medals overall – they had won just three golds at Vancouver four years ago.

Winning a country’s first Winter Games gold medal for 20 years is a special occasion. The circumstances in which the Ukraine women’s biathlon team achieved that feat in the 4x6km relay made it perhaps the most popular medal of the Games.

While Kiev was in ruins following violent anti-government protests that have claimed over 70 lives, the quartet of Juliya Dzhyma, Olena Pidhrushna and twin sisters Valj and Vita Semerenk joined hands, smiled and raised their arms at the finish line.

Despite the horrific scenes in their home country, the team had maintained their focus to ski fastest and shoot cleanest to finish on the top step of the podium and relegate the more established nations of Russia and Norway to silver and bronze respectively. The winning margin was over 26 seconds.

“Great proof of how sport can unite the nation,” Sergey Bubka, leader of the Ukrainian Olympic Committee, tweeted.