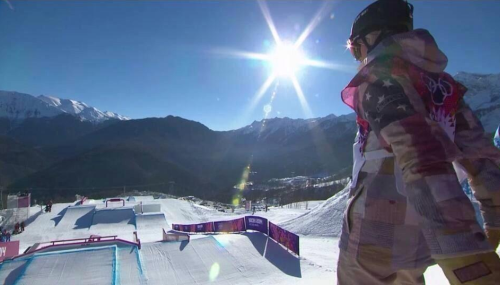 Each year the British media covers the inevitable chaos that ensues when the country comes to a complete standstill due to adverse weather. Some years it is snow, this year it is rising water levels due to unrelenting rain.

Traffic comes to a halt, passengers get stranded in airports and the public wonder why the inept infrastructure can’t deal with the conditions in comparison to our European counterparts.

Sochi’s Winter Olympic organisers are having the opposite problem: they’re praying for snow, as the lack of it is threatening to disrupt outdoor events.

Every morning it is quite safe, but our concern now is mostly about (warm temperatures in) the daytime

With temperatures predicted to reach 19° C on Friday, organisers have admitted there have been teething problems but that they have no plans as yet to call on artificial snow reserves.

Oleg Kitov, deputy competition manager of the Rosa Khutor Extreme Park said: “The conditions have been difficult for the last eight days.

“Before that, it was a mixture of natural and artificial snow, now it’s more like a granular snow on the surface. There is no plan to bring in more snow, but we will see what happens.”

Kitov said temperatures at the park were 11 degrees in the shade, but 15 in the sun so maintenance teams had been pumping dry ice onto the aerials course and water and salt on the halfpipe.

“Every morning it is quite safe, but our concern now is mostly about (warm temperatures in) the daytime,” he said.

However, the IOC do not seem to share the same doubts, with communications director Mark Adams denying any problems with the softer snow.

“Concerns are a little premature. I was at some of the events on Tuesday and it doesn’t seem to me to be an issue,” he said.

“I gather snow is coming at the weekend and that temperatures will go down at the weekend, but not being a weather forecaster I can’t be sure.”

Lack of snow is not a problem you might expect in Russia, but Sochi enjoys subtropical conditions by the Black Sea and has the warmest climate in the country.

The most expensive games in Olympic history played on this contradictory nature, Sochi’s motto reading “Hot. Cool. Yours.” to reflect the oxymoron of snowy slopes next to exotic palm trees.

But worry still grew over Sochi’s ability to counteract the warm temperatures in order to keep the slopes running smoothly.

“We have 98 medal events and half of them will be in the mountain cluster,” said the head of Sochi 2014 sport functions Sergey Bondarenko prior to the games.

“Those athletes will be the ones subjected to the change in weather. The history of the Olympic Games shows it is common for events to be postponed or cancelled. But organisers have always managed to hold all events.”

He also defended the games, saying that Vancouver, Turin, Nagano and Sarajevo had all experienced similar difficulties.

Athletes expressed their concern over the course conditions even before the games began, with it being the primary focus of many pre-tournament press conferences.

On February 3, Swiss snowboarder Jan Scherrer said: “”The snow is super hard and fast. If it gets slushy it will be hard to get enough speed to go over the big jumps.”

On Tuesday Canadian cross-country skier Heidi Widmer said the Laura Biathlon and Ski Complex was “super-sugary and slushy” while a rival described the downhill section as “very deep and soft.”