Sochi 2014: Ted Nolan lost father aged 14 and mother in accident on way to ice hockey career in NHL then Olympics as Latvia coach 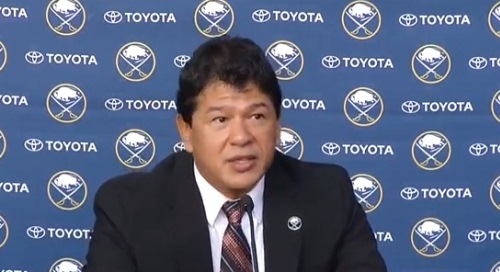 While Latvia may not challenge for a medal in the men’s ice hockey their coaching staff can certainly bring some perspective to the Olympic experience.

Coach Ted Nolan is the 10th of 12 siblings from a Ojibwa Native American family that grew up without any running water or electricity on the Grand River First Reserve in Ontario.

Meanwhile assistant coach Tom Coolen has spread the hockey gospel around Europe and is living his dream by coaching at the Olympics.

There are a lot more serious things in life to be worried and pressured about. Sports is not one of them

Nolan’s story though is perhaps the more remarkable: rising from poverty to a playing career in the NHL with the Pittsburgh Penguins and the Detroit Red Wings.

Growing up playing youth hockey, Nolan and his brother had to make sure they were not on the ice at the same time as they had to share a stick, helmet and gloves.

He lost his father at just 14 and then his mother to a drunk driver so the 55-year-old knows a thing or two about perspective.

“We are playing a game and there are a lot more serious things in life to be worried and pressured about. Sports is not one of them,” he told the Olympics News Service.

The Canadian had a two-year spell coaching in the NHL with the Buffalo Sabres until 1997 but it took another eight years for him to get another chance which again only lasted for two seasons.

He became Latvian coach in 2011 and led the team through qualification to get to Sochi but in November 2013 Nolan got a call from the Sabres who offered him the coaching job.

“The first thing I mentioned to [the team’s representative] was whether I could coach the Latvia team in the Games,” he said.

“I am no different than most people in that I want to be in the NHL, but I wanted to coach Latvia and fulfil my obligation.”

For Coolen things were little different.

“I’ve coached in Switzerland, Germany, Austria and now in Latvia with the national team,” he said.

“I’m coming to the end of my coaching career, so to be here at the Olympics is really kind of a dream come true.”

Coolen had accepted a teaching job in his native Canada thinking his adventurous coaching career was over but then Latvia came calling in 2012.

The 60-year-old is glad that his children were exposed to different cultures early in their lives and is happy to have spread the sport he grew up with into Europe.

“Certain countries export different things and one of the things Canada exports is hockey coaches,” he said.

“I would like to think I’m one of them. We’ve spread our gospel.”

Latvia start their campaign later on Wednesday against Switzerland while 2006 champions Sweden, who along with Finland are expected to challenge for honours, meet the Czech Republic.