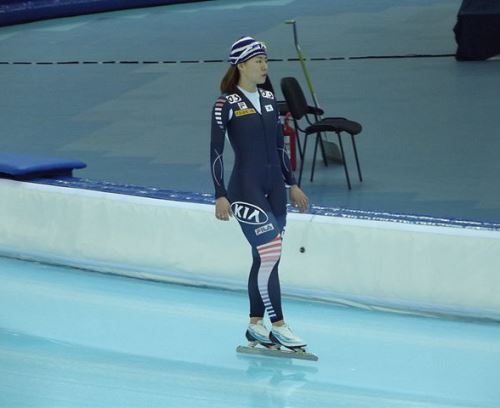 Lee Sang Hwa solidified herself as one of the dominant forces in Sochi as she defied a sore knee to retain her 500m speed skating title.

The South Korean, 24, secured her country’s first medal of the games by dominating the field to power to a new Olympic record on the second run of 37.28 seconds for a total time of 74.70.

Lee has become the second youngest speed skater, after the Soviet Union’s Lidia Skoblikova, to win a second Olympic gold medal in one specific event.

The extent of Lee’s dominance is frightening. She won seven of the eight world cup races this season and broke the ladies 500m world record four times in 2013.

Lee is a reserved and mysterious character off the ice and like all South Korean skaters she does not speak to journalists before competition.

“I was very upset about it, that’s why I decided to be very concentrated on the race to get a good result,” she said regarding compatriot Tae Bum Mo failing to win a medal in the men’s 500m.

“I wasn’t sure that I could get a gold medal because my left knee was hurting.

“I trained very hard and I had great faith in myself.”

Bronze medallist Margot Boer from the Netherlands summed up the seemingly inevitable result and the mind-set of the competition ahead of today’s final.

“I am going to skate one of the best races of my life and everything is possible, there are two medal places on the podium after Lee’s gold,” she said.

“There is just one way to beat Lee and that is if she makes mistakes on the ice.”