Sochi 2014: Use your head and follow example of USA slider Katie Uhlaender 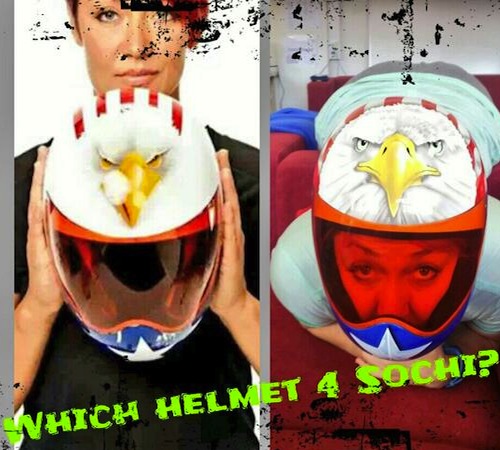 Helmets are an important part of many Winter Olympic athletes’ attire, and for American skeleton slider Katie Uhlaender her headwear is for style as much as safety.

Uhlaender is known for her shock of bright red hair as well as her artistic helmet designs, and the two-time World Cup winner has now let her Twitter followers chose which helmet she wears in Sochi.

She gave her fans the option of two lids which featured the American Bald Eagle and the red stripes of the US flag and the Twittersphere chose the one with the biggest Eagle and toothpaste-like stripes.

There were like a thousand tweets about it. I decided to tally it up and let them pick my helmet

And Uhlaender, competing in her third Olympics, says she was nervous about changing her helmet so close to the Games.

“When I was in the village, I was trying to decide which helmet to wear, joking around with the snowboarders. Jamie Anderson was one of them and I just decided to tweet a photo of both helmets and see what the public thought,” she said.

“I wasn’t sure [that] changing helmets just before the Olympics was a good idea and it blew up.

“There were like a thousand tweets about it. I decided to tally it up and let them pick my helmet.”

Uhlaender may not be in many people’s medal predictions, but she will at least be sliding in style.

Britain’s Lizzy Yarnold, however, is one of the favourites for the gold medal and the 2013/14 World Cup winner was the fastest slider in the two practice session on Tuesday morning.

And while she enjoys the training runs, they play an important role in her quest for a medal.

“I have two more [training] runs left and each run has to be a real experiment, I have to try as many lines as I can, work out what’s the best thing to do in the race.”

“I have really simple goals, not only here but at every world cup competition – I’m there to perform my best over the six official training runs and just try as best as I can when it comes to race day.”