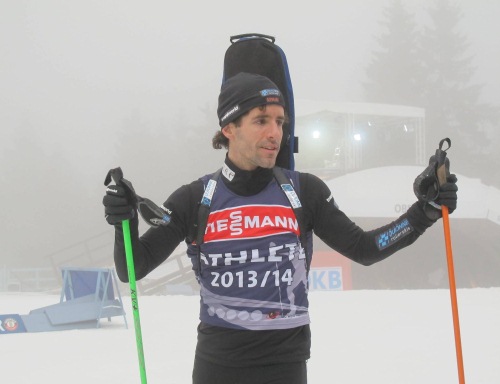 Spanish biathlete Victor Lobo Escolar’s route to Sochi has been harder than most with him even resorting to making his own roller skis to keep up with training.

The 34-year-old has had to juggle preparation for the Games with his job as an engineer in Aragon and this has forced him to be creative to remain competitive.

I buy my skis, poles, waxes, rifle, and ammunition and I test and prepare my skis for the competitions. But it is not hard – it is like a hobby for me

“I go to my job by roller skis almost every day, 10km there and 10km back,” he told the Olympic News Service. “I made my own roller skis very similar to skis. I do shooting training two days a week in a camp in Huesca (in Spain), and run to increase my heart rate.

“I organise my trips and hotels, and I pay for them myself. I buy my skis, poles, waxes, rifle, and ammunition and I test and prepare my skis for the competitions,” he continued.

Lobo Escolar made the 20-strong Spanish team at Sochi having only taken up biathlon three years ago, switching from winter triathlon where he was a seven-time champion of Spain.

His former sport, a combination of running, mountain biking and cross country skiing, was denied inclusion at the 2014 Games so the Spaniard switched codes to fulfil his Olympic dream.

“When I started some said I had a chance to go, but it looked very distant,” Lobo Escolar said. “Now I’ll be at the Olympics – it’s an unthinkable prize.”

He had barely picked up a gun when he made the change and had to wait a full year to get the right licence to shoot in competition.

“To be a biathlete, in addition to fitness, you have to have a steady hand because if you tremble you are lost,” he continued. “You come to the mat to stop and shoot with your heart rate at about 180 beats and in 30 seconds you get to ski again.”

The Spaniard has set his sights on qualifying for the 12.5km pursuit which takes place on Monday but will have his work cut out if recent results are anything to go by.

Only the top 60 qualify from Saturday’s 10km sprint, an event in which Lobo Escolar could only finish 120th at the 2013 world championship in Novo Mesto in the Czech Republic.

Meanwhile Lobo Escolar’s biathlon teammate Victoria Padial Hernandez will has grander Olympic ambitions when she takes to the slopes on Sunday in the 7.5km sprint.

The 25-year-old was Spain’s first female biathlete to compete at an Olympic Games in Vancouver 2010, and she arrives in Sochi in great form having won a silver medal at the 2014 European championship, also in Nove Mesto, last Saturday (1 February).

Sochi 2014: A stroke of bad puck for men’s US hockey manager