Sochi 2014: Switzerland win big, while Domracheva takes her second of the games for Belarus in action-packed day 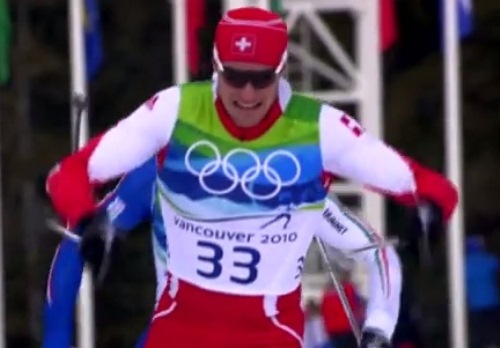 Viletta took the victory in the men’s super combined skiing ahead of Croatia’s Ivica Kostelic and Italy’s Christof Innerhofer, despite only having the 14th fastest time on the opening downhill run.

The 28-year-old put in the second fastest slalom time, however, to finish 0.34 seconds ahead of Kostelic, whose father Ante designed the slalom course.

The fastest skier on the downhill, Kjetil Jansrud, could only manage fourth place, with a poor slalom run in which he gave up almost three seconds to Viletta.

Britain’s Lizzie Yarnold won gold in the women’s skeleton, having led the competition through all four runs of the competition and setting two track records in the process.

Earlier, Russian slider Alexander Tretiakov was the surprise leader in the men’s skeleton after two runs, setting a track record 55.95 on his first run, backing it up with a run of 56.04 taking him into the final two runs tomorrow.

Belarusian Darya Domracheva won her second gold of the Games by taking the win in the 15km biathlon by over a minute from second placed Selina Gasparin of Switzerland.

Domracheva missed one out of her 20 shots, whereas Gasparin and fellow Belarusian Nadezhda Skardino were perfect, however the gold medallist stormed to the gold on the strength of her skiing.

Finally, GB’s female curlers took their second 12-point win of the tournament, as Team Muirhead defeated Japan 12-3 to put them into joint-third position in the round robin table through five games.